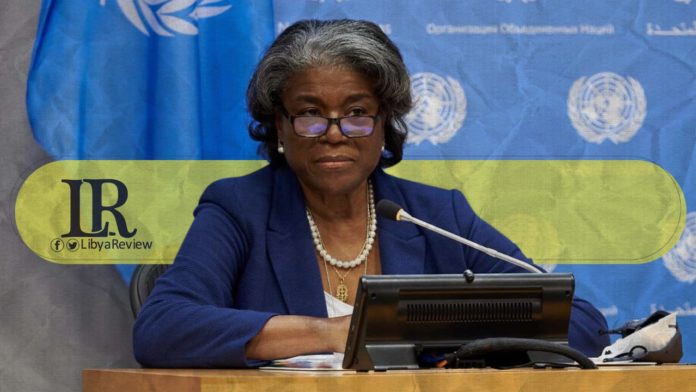 United States (US) Ambassador to the United Nations (UN), Linda Thomas-Greenfield, called on all foreign parties involved in the Libyan conflict to stop their military intervention and withdraw immediately.

During her speech before the UN Security Council on Friday, Greenfield stressed that the training and financing of mercenaries, proxy forces and armed groups in Libya must be stopped. She affirmed that all foreign military support that conflicts with the UN arms embargo must be ended.

Earlier today, the UN Envoy on Libya, Ján Kubiš, called for a sequenced withdrawal of all foreign forces and mercenaries from Libya with monitoring provided by the United Nations Support Mission in Libya (UNSMIL). He affirmed the need to uphold the arms embargo, adding that Libya’s armed groups are threatening security beyond Libya’s borders.

On Tuesday, an American delegation headed by the Acting Assistant Secretary of State for Near Eastern Affairs, Joy Hood, visited Tripoli, where they met Head of the Presidential Council Mohamed Al-Mnifi and Libyan Foreign Minister Najla Al-Mangoush.

Hood affirmed his country’s support for the Government of National Unity (GNU) in conducting fair elections, condemning the presence of armed groups and foreign forces in Libya.