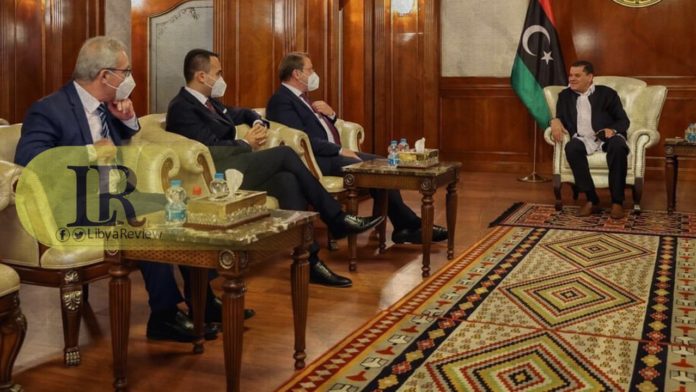 On Friday, Prime Minister of Libya’s Government of National Unity (GNU) Abdulhamid Dbaiba received a European delegation that included the Italian and Maltese Foreign Ministers as well as the EU Commissioner for Neighborhood Policy and Enlargement Negotiations.

The Prime Minister’s press office stated that Dbaiba discussed ways to combat organized crime and border control with the European officials. “The two sides also exchanged views on how to improve joint coordination to deal with the recent increase in flow of migrants from Libya to Europe and organised crime”.

Italian Foreign Minister Luigi Di Maio, his Maltese counterpart Evarst Bartolo and EU Commissioner Olivér Várhelyi arrived in Tripoli on Friday morning, on a visit aimed at “determining the path of European support for the achievement of social and economic recovery in Libya,” according to AKI news agency.

The three EU officials also met with the Libyan Foreign Minister Najla Al-Mangoush, who described illegal immigration as a “sad story” and considered it a “humanitarian, national and economic security problem”. She confirmed that the Coast Guard should be “part” of the strategy to combat the illegal immigration and “not the only solution”, highlighting Europe’s need to not focus on addressing the crisis via dealing with armed groups and the Coast Gaurd solely, but to shift towards a holistic approach.