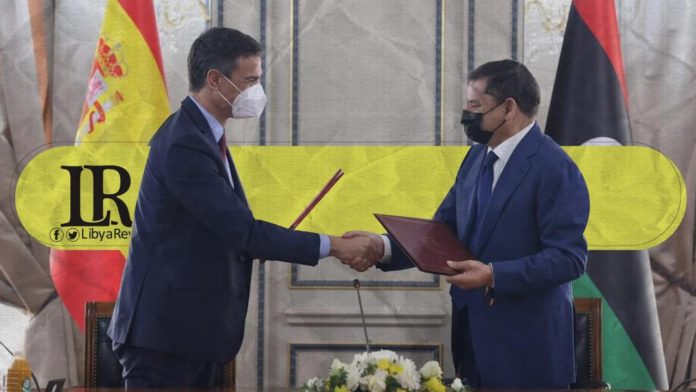 Head of Libya’s General Union of Chambers of Commerce, Industry and Agriculture, Mohamed Raeid signed a joint cooperation memorandum of understanding (MoU), with the Director-General of the Spanish Chamber of Commerce, Inmaculada Riera.

Raeid expressed his aspiration to strengthen the existing Spanish-Libyan partnership. He stressed the importance of exchanging information and experiences, encouraging investment between the two countries, cooperation in the field of training, increasing the volume of trade exchanges, and a number of other topics of common interest.

Riera affirmed the readiness of the Spanish chamber to fully cooperate with its Libyan counterpart in organizing exhibitions and trade missions, intensifying business visits, in addition to organizing commercial and economic training workshops.

The MoU signing ceremony was attended by the Prime Minister of the Government of National Unity (GNU) Abdel-Hamid Dbaiba, and his Spanish counterpart Pedro Sánchez. Notably, Dbaiba held talks with Sanchez, who is currently visiting Tripoli, to discuss enhancing bilateral relations.

In a joint press conference, Dbaiba welcomed the return of diplomatic relations between Libya and Spain after the absence of high-level diplomatic representation for years. He noted that this sends a message, that Libya is witnessing a new stage towards stability and recovery after years of war and destruction.