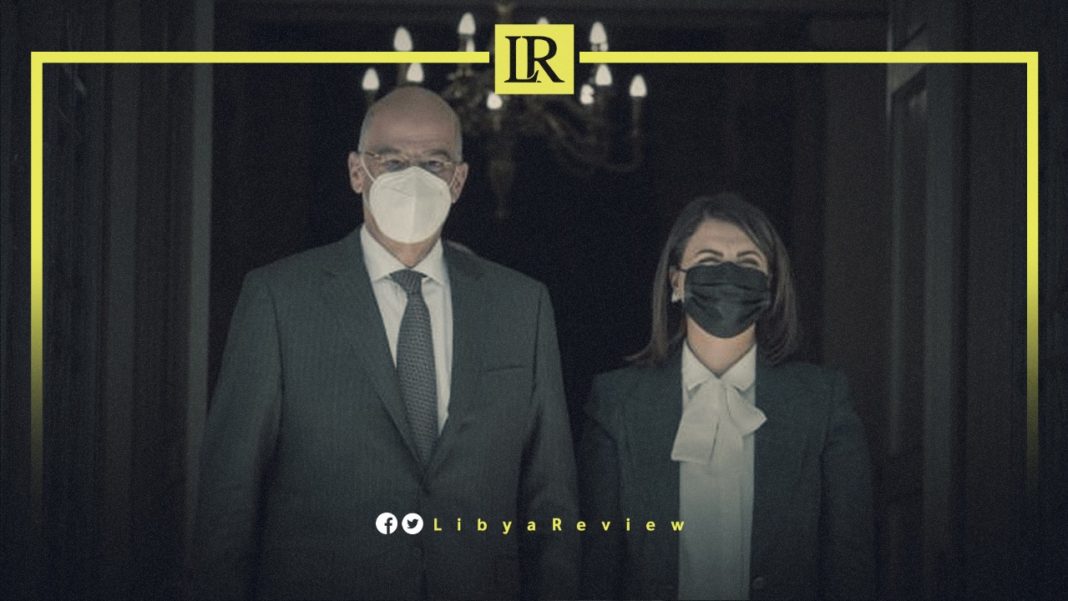 Libya and Greece are moving ever closer enhancing their ties and cooperation. Libya’s Foreign Affairs MinisterNajla Al-Mangoush and Greece’s Foreign AffairsMinister Nikos Dendias had a fruitful meeting in Athens on Monday, September 6. This is another step in the development of Greek-Libyan ties after the recent visit in April of Greek Prime Minister Kyriakos Mitsotakis and an accompanying Greek delegation to Libya and the reopening of the Greek Embassy in Tripoli and the Greek Consulate in Benghazi.

During the joint statements after the meeting, the two officials reaffirmed the excellent level of bilateral relations between Libya and Greece. Greece’s Foreign Affairs Minister stressed the need for the withdrawal ofall foreign troops and all paramilitary and mercenary forces from Libya, so that elections can proceed in order. Libya’s Foreign Minister emphasized the need for effective EU assistance towards Libya and called for Greece’s active presence in this matter.

Greek presence in Libya has intensified over the last period and bilateral ties grow steadily creating the grounds for an amicable and prosperous future. On a bilateral level Greece donated 200.000 vaccines to Libya to assist it as a friendly neighbor in its fight against the Covid pandemic. Greece is also present in preparations of operating the Tobruk power plant, while Greek business circles are preparing substantial investments in Libya, in the field of reconstruction and trade. On a multilateral level Greece contributes to the Irini Operation of the EU participating with military vessels and aircraft. Greece puts pressure in EU working mechanisms to upgrade their assistance –financial, technical and diplomatic- towards Libya, a neighboring state that is pivotal for the security and stability of Europe. Security and stability of Libya is essential for the security of the European Union and especially the coastal states of the south, as Greece, Italy, Malta, France, and Spain.

Greece, the closest European state to Libya, could further enhance and upgrade its presence in Libya in many fields. Concerning fire outbreaks, as the one experienced in July in the Jebel Akhdar region in eastern Libya, Greece, which has also faced terrible fires, could pledge to permanently provide air assistance if needed with Canadair aircraft operating from the island of Crete. These aircraft can operate in eastern Libya without the need to refuel or even land, as Libya is well within theirflying range. Crete is the closest European ground to Libya, lying only 30 minutes away concerning flying time. Greece can also assist Libya, if asked, with delegates for the fair organization of the December elections. Above all, Greece as a member of the European Union and NATO can prove to be a trustworthy representative of Libya’s needs and national interests in the framework of the EU and security structures. Greece is the only state in the Eastern Mediterranean that is both a member of the EU and NATO.

The most stressing general need is to ensure the independence, sovereignty and territorial integrity of Libya against internal challenges and external interference. Concerning internal prospects, the holding of fair and indisputable elections in December according to the provisions of the UN resolutions and in line with the wishes of the Libyan people itself shall create a truly representative government accepted by all segments of Libyan society. The use of elements from Libya’s constitution can help in this crucial matter. This new government of Libya after the December elections can then move forward to free itself from unnecessary burdens of the past, as the invalid and illegal Memorandum with Turkey that has been rejected by the Libyan House of Representatives itself and by the international community in total. Concerning external interference the territorial integrity and de facto independence of action of Libya is intricately linked to the complete withdrawal of all foreign elements, mercenaries and foreign military presence of any kind.

Libya is not just another country close to Europe and this has to be understood from European decision-making mechanisms; Libya is the keystone for the collective security and stability of the EU. The creation of a new architecture of stability including Libya, Greece, Egypt, Cyprus as a network of allies and the whole of the EU is essential for regional stability and the only way forward.

DR. IOANNIS E. KOTOULAS is Lecturer in Geopolitics at the University of Athens, Greece.