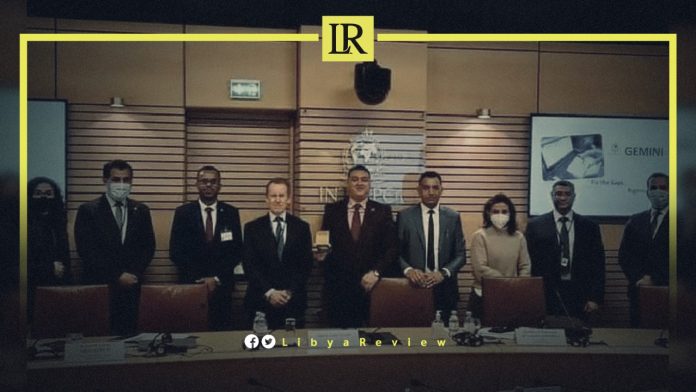 The meeting included the Head of the Information Division of the Libyan Ministry of Interior, Lieutenant-Colonel Gowhar Al-Fitouri, the Interpol Sub-Directorate for the Middle East and North Africa, as well as some international partners.

During the meeting, they were closely acquainted with working mechanisms, exchanging experiences. They discussed projects and initiatives that benefit the Arab and International Criminal Police Office and some components of the Libyan Ministry of Interior.

They emphasized continuing the security cooperation and agreement to set up a mechanism for building police capacity and logistical support. This was reported by the Media Office of the Ministry of Interior in the Government of National Unity (GNU).

In September, Libyan Interior Minister, Khaled Mazen met with the Secretary-General of Interpol, Jürgen Stock and discussed possible cooperation between the two sides.

In a statement the Interior Ministry said that the meeting focused on, “combating terrorism, illegal immigration, and corruption.”

“Mazen and Stock discussed ways of successful cooperation to implement security operations and the importance of coordination in this regard, on an ongoing basis,” the statement added.

Interpol is an international police organization with 192 country members and seven regional offices. It is represented by an office at the United Nations (UN) in New York and another with the European Union (EU) in Brussels. The organization’s secretariat is headquartered in Lyon, France.

In May, the Head of Libya’s Interpol National Central Bureau, Adel Bentaleb said that they had noticed a marked increase in drug traffickers using Libya as a transshipment point. This included drugs from as far as South America.

“While many of these drugs are neither produced nor consumed here, this has not spared us from the violent crime inevitably wrought by such activity. We are determined to combat this alongside Interpol,” Bentaleb said.

Drugs worth nearly €100 million have been seized in Africa and the Middle East, during a large international police operation in March and April of this year.