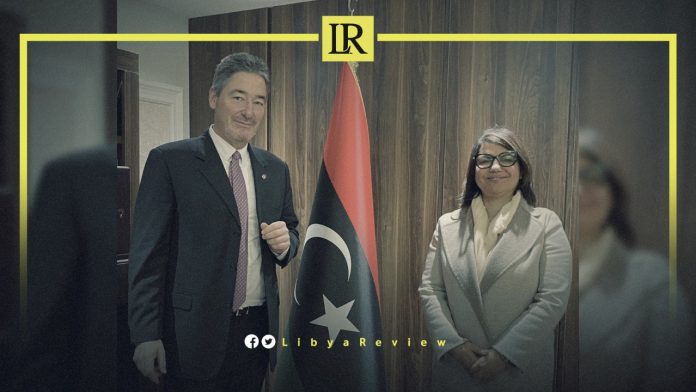 On Wednesday, Libyan Foreign Minister, Najla Al-Mangoush met with the German Ambassador to Libya, Michael Ohnmacht in Tripoli. They discussed the electoral process, political developments, and their impact on the elections.

During the talks, the Ambassador reiterated Berlin’s support for Libya’s democratic process. He also called on international parties to contribute to the success of the political track, in order to bypass this critical stage.

Last week, Ambassador Ohnmacht announced that Berlin would increase its contribution by an additional €3 million euros to support the United Nations Development Programme (UNDP) ‘Promoting Elections for the People of Libya’ (PEPOL) project.

He added that this will help UNDP continue its support for Libya’s High National Elections Commission (HNEC) in preparing and conducting elections. In partnership with the United Nations Support Mission in Libya (UNSMIL), the project aims to strengthen HNEC’s capacity to plan and prepare for elections.

Currently at stake is a peace process that had been seen as the best hope in years of bringing an end to the decade of chaos and violence that has engulfed Libya since a NATO-backed uprising which ousted Muammar Gaddafi in 2011.

Amid the uncertainty, HNEC has dissolved the committees that had been preparing for the vote, essentially conceding that they would not occur on time. This remains the closest thing Libyans are likely to get to a formal announcement, given all parties’ reluctance to make such a declaration and take the blame. A lengthy delay poses the risk that the country will again descend into fragmentation and violence.

The commission has also proposed a new date for the first round of the Presidential election — 24 January. As well as calling on the Libyan Parliament to address the challenges that delayed the holding of the elections as planned.