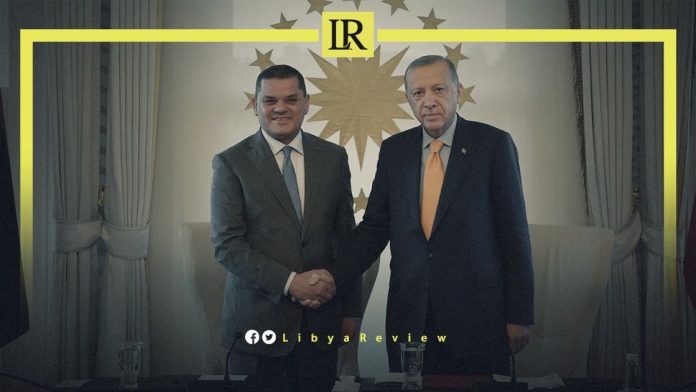 Turkish President Recep Tayyip Erdoğan and the Prime Minister of the Libya’s outgoing Government of National Unity (GNU), Abdelhamid Al-Dbaiba held a meeting in Istanbul, and discussed a number of economic, military and political files on Friday.

Al-Dbaiba’s Media Office said both sides discussed increasing military cooperation through training and development for all military and support forces.

Erdoğan stressed the need to preserve the security and safety of Tripoli from any military attacks, and the change of governments can only take place through elections. He affirmed his support for Libya in economic, security and military fields.

They agreed on a work program between the two countries that includes military and energy cooperation. As well as the return of Turkish companies to complete the pending projects in Libya.

Earlier this month, Libyan Parliament Speaker, Ageela Saleh, said he had a “very productive” meeting with the Turkish President Recep Tayyip Erdoğan during his visit to Ankara.

According to Turkey’s news agency Yeni Shafak, Saleh said he wanted support from Ankara for the preservation of Libya’s territorial integrity. He said that he informed Erdoğan about the situation in Libya during the meeting.

The Libyan Speaker pointed out that Turkish companies are playing an important role of Libya’s reconstruction process.

“We need to cooperate with these companies in order to complete their old contracts so that they can contribute to the reconstruction of Libya again,” he stressed.

Underlining Turkish companies’ role in the development of Libya, the Speaker added that they want to take the relations with Ankara to the next level.