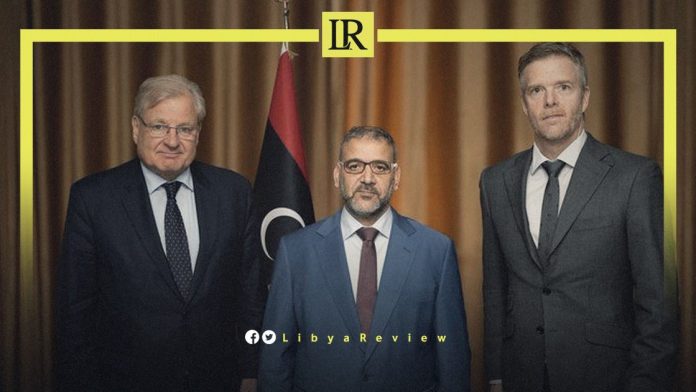 Three days ago, the Head of Libya’s High Council of State (HCS), Khaled Al-Mishri, claimed that holding elections requires an executive authority capable of extending its influence over all of Libya. The executive authority would have to be backed by a unified supervisory authority.

This was said during a meeting with the United States (US) Ambassador and Special Envoy to Libya, Richard Norland, accompanied by the Chargé d’Affairs at the US Embassy, Leslie Ordman, in Tripoli.

Al-Mishri, affiliated with the Muslim Brotherhood in Libya, claims in more than one appearance that he is leading efforts to complete the elections in Libya. In addition, he pre-empted the expected negotiations with Parliament Speaker Ageela Saleh on the constitutional base. He did this by voting on controversial articles related to dual nationals and the candidacy of military personnel.

The HCS established an alternative opinion regarding the two articles that are the subject of disagreement with the House of Representatives (HoR). This prevented an agreement with it on the constitutional rule for the postponed elections since last year.

The HCS preempted discussions with the Parliament, with the Muslim Brotherhood standing behind it, in an attempt to impose a fait accompli. Consequently, the tension rose and the completion of the agreement on the constitutional basis was obstructed.

Observers say that the success of any negotiations between the Libyan parties depends on the Muslim Brotherhood’s disengagement efforts. Reaching a constitutional basis on which to build the political process is one of the basics for moving towards parliamentary and presidential elections. This is what the group does not want, except if it occurs on its conditions.

The former Spokesperson for the Libyan Presidential Council, Mohamed Al Salak, said that that the HCS is responsible for obstructing consensus on this file. Al Salak added that the HCS wants to impose rules that it was not granted with when it was formed, such as the nomination of military personnel and dual nationals.

Al Salak pointed out that the steps of the United Nations (UN) Envoy, Abdoulaye Bathily, on the Libyan scene are not yet clear, as he continues his tours and consultations.

The Muslim Brotherhood seeks to block any political agreement in Libya. It is working, through the leader of the organisation, Ali Al-Sallabi, and a member of the Libyan Political Dialogue Forum (LPDF), Ali Al-Dbaiba, to complete its plans. The most prominent of these schemes was the decision to elect the Head of the outgoing Government of National Unity (GNU), Abdelhamid Al-Dbaiba, by intimidating the Misrata militia participants and providing them with money to pass the organisation’s agenda at the LPDF in 2020.

At the same time, Ali Al-Dbaiba, Ali Al-Sallabi, and Al-Siddiq Al-Kabir have had a partnership since 2011, through Ibrahim Al-Dbaiba, son of Ali Al-Dbaiba, former Director of the Organization Development of Administrative Centres Authority and the current Governor of the Central Bank of Libya (CBL), according to a report published by Companycheck website, which specialises in providing data on limited companies registered in the United Kingdom (UK).

The report stated that the Isand Company was registered under the number 07656370 in the name of the trio “Ali Al Dbaiba, Al Salabi and Al Kabir” in London on June 2nd, 2011, without providing clear information about the company’s activities and its capital.

The Muslim Brotherhood continues its attempts to obstruct the holding of elections, through its positions in the Justice and Construction Party, led by Muhammad Sawan, in addition to Nizar Kawan, who is a member of the LPDF, and others. All of this despite its decision in May 2012 to change its name to ‘Revival and Renewal’ group.

The matter was no more than a political manoeuvre within the framework of implementing the instructions of the Muslim Brotherhood, which seeks to improve its image. It aims to do this after the defection of the former Head of the Justice and Construction Party, the political arm of the organisation in Libya, and the establishment of the Democratic Party in August 2021, claiming that it would be far from the Muslim Brotherhood’s ideology.