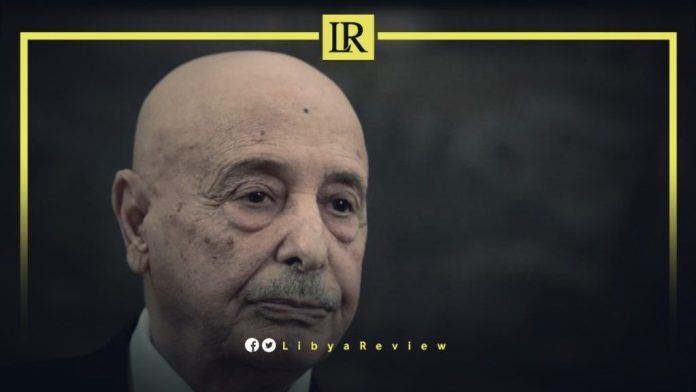 On Tuesday, the Speaker of the Libyan Parliament, Ageela Saleh called on the High Council of State (HCS) to resume the constitutional dialogue in order to reach an agreement on the outstanding articles, and end the political deadlock in the country.

The HCS has not yet commented on the Parliament’s request. It announced the suspension of all consultations with the Parliament, until the law establishing the Constitutional Court in the city of Benghazi is revoked.

The official Spokesman for Parliament, Abdullah Blaihaig said Saleh called on the HCS to “resume dialogue to discuss the few remaining articles of the draft constitution.”

According to Blaihaig, Saleh stressed that the state is going through “a critical stage that requires everyone to give priority to their interests, to end the current deadlock.”

Earlier this month, HCS Head, Khaled Al-Mishri announced the suspension of talks between the two chambers, after Parliament approved the law establishing a Supreme Constitutional Court based in Benghazi.

The Prime Minister of Libya’s Government of National Unity (GNU), Abdel-Hamid Dbaiba stressed that he “will not step down from power until after a constitution is drawn up for the country, even if it takes 30 years.”

Notably, Saleh and Al-Mishri agreed to unify the executive authorities of Libya by 2023. They held a meeting in Morocco to discuss the political blockage, the constitution, and the distribution of sovereign positions. During a joint press conference at the headquarters of the Moroccan Ministry of Foreign Affairs, Al-Mishri said: “2023 will not come unless the executive authority and sovereign positions are united.”

However, the HCS voted unanimously to prevent the candidacy of dual nationals and military personnel from the presidential elections. The step could maintain the ongoing dispute between the HCS and Parliament over the constitutional base and make it difficult to set a date for the elections.