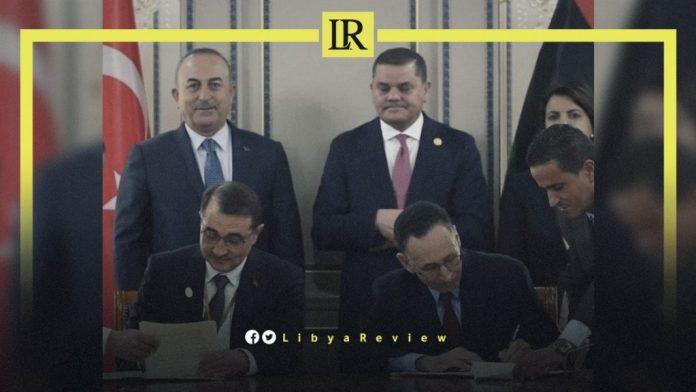 On Tuesday, the Tripoli Court of Appeal ruled to suspend the implementation of the Libyan-Turkish memorandum of understanding, on oil and gas exploration in the Mediterranean.

This came after five lawyers had appealed to the Court of Appeal against the agreement signed by the Tripoli-based government with Ankara.

They argued that the Libyan Political Agreement “prevents the Dbaiba government from concluding any international agreements.”

They pointed out that the agreement violates many items of the oil law, most notably the lack of Turkish companies’ experience in this field. As well as “violated the State Audit Bureau law in controlling public funds. As well as the state finance law of 2008, regarding the management of state funds.”

On his part, Libyan lawyer, Walied Ragab praised the decision. He added that “the important thing is that no one is above the truth, and the law must be respected.” He confirmed that “this can only be done with the courage and wisdom of the Libyan judiciary. Great appreciation and respect for the independent judiciary in Libya.”

In October, Libya and Turkey signed a series of economic agreements that included potential energy exploration in maritime areas.

Greece notified the UN secretary-general that the current Libyan government in Tripoli has no right to proceed with any agreement that binds subsequent, democratically elected governments.

During a joint press conference with his Egyptian counterpart, Sameh Shoukry in October, Greek Foreign Minister Nikos Dendias accused Turkey of exploiting “the turbulent situation in Libya to further destabilize security in the Mediterranean region, and establish a regional hegemony.”

The MoU allows Turkish companies to carry out exploratory drilling for oil and natural gas. “The agreement will allow for oil and gas exploration in Libyan waters, and come three years after the two countries signed a maritime border deal, Turkish Foreign Minister Mevlüt Çavuşoğlu said after signing the MoU in Tripoli.