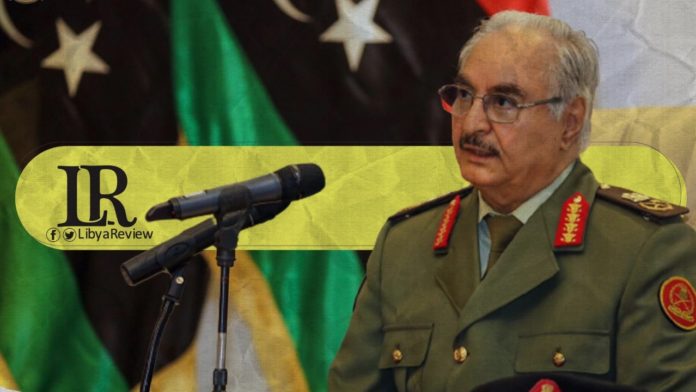 On Saturday, the Commander-in-Chief of the Libyan National Army (LNA), Field Marshal Khalifa Haftar demanded that the presidential and parliamentary elections be held as scheduled on December 24th. He stressed the need for armed groups spread in the country to be dissolved.

The LNA commander-in-chief stressed the importance of the armed forces’ role in fighting terrorism and launching the political process in Libya.

In the meantime, the Speaker of the Libyan House of Representatives (HoR), Ageela Saleh, confirmed adherence to the date of the presidential and parliamentary elections.

“The election of the next President of the country should be directly from the Libyan people,” Saleh said, in a meeting with Head of the United Nations Support Mission in Libya (UNSMIL), Ján Kubiš.

Notably, Kubiš called on the Libyan Parliament and the High Council of State (HCS) to live up to their responsibilities and hold consultations on clarifying the constitutional basis for the December elections. They must also enact electoral legislation, within 2-3 weeks, ideally by 15-20th of June.

In his closing speech during the virtual session of the Libyan Political Dialogue Forum (LPDF), Kubiš said that this comes in line with Security Council resolution 2570. This places the responsibility squarely on the relevant authorities and institutions in Libya, including the Parliament, and the HCS.

He confirmed that a large majority of LPDF members expressed the need to end the transitional phase by holding the elections on the 24th of December. This is to give the Libyan people the chance to express their will democratically and to renew the legitimacy of national institutions through the polls.