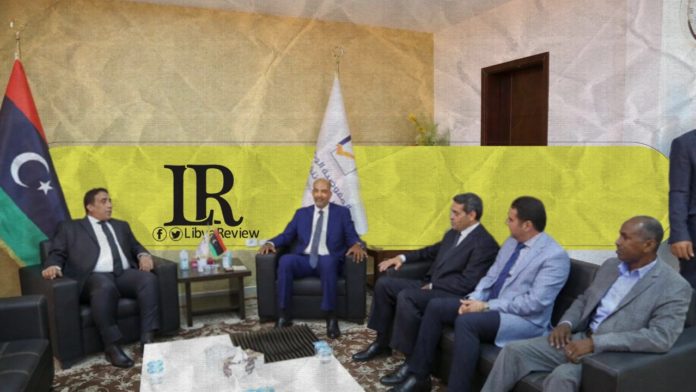 On Tuesday, Head of Libya’s Presidential Council, Mohamed Al-Mnifi confirmed his support for the High National Elections Commission (HNEC) to hold the elections scheduled for 24 December. This came during his visit to the HNEC headquarters in Tripoli, alongside his deputy, Musa Al-Koni.

According to a statement by HNEC, Al-Mnifi was received by HNEC Head, Emad Al-Din Al-Sayeh, and members of the Commission’s board, Abdel-Hakim Al-Shaab, Rabab Haleb, and Abu-Bakr Marda.

The meeting reviewed the latest developments in the Libyan political scene, and ways to support the commission and raise its readiness to manage the electoral process.

Al-Mnifi appreciated the commission’s efforts in fulfilling its duties during this critical stage, and working to achieve the democratic aspirations of the Libyan people.

On Monday, Al-Sayeh received the German Ambassador to Libya, Oliver Owcza at the HNEC headquarters in Tripoli. The meeting reviewed the latest developments in the political scene, and the commission’s preparations for the December elections.

According to a press briefing by HNEC, they discussed the technical and advisory support that the German government is able to provide to Libya.

The two parties also discussed cooperation to overcome obstacles that the electoral process may face. As well as how to achieve success that meets international standards for elections, and achieves the highest levels of professionalism.