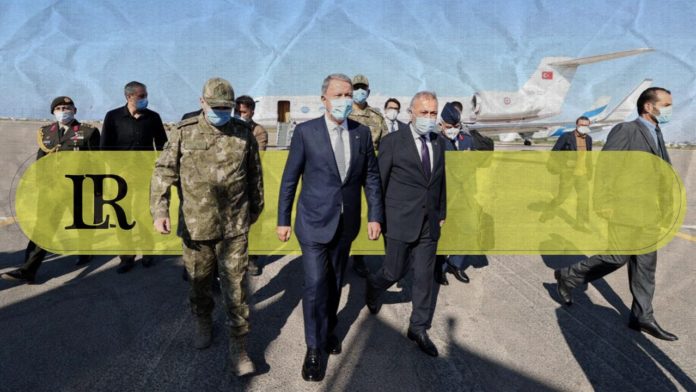 Libyan political analyst, Ayoub Al-Awjali, said that the Turkish delegation’s visit to Tripoli was surprising but at the same time, it was expected. He noted that Turkey has no intention to leave Libya as it did not take a single step towards implementing the outcomes of the Libyan Political Dialogue Forum (LPDF) in Geneva.

In press statements, Al-Awjali, explained that the Turkish delegation’s visit was focused on assessing the current situation, and gaining the support of some Libyan parties, especially with the approach of the parliament session to approve the interim Government of National Unity’s (GNU) budget and name the heads of sovereign positions in the country.

He pointed out that Turkey is seeking to prove its presence in Libya, stressing that the successive visits of many Turkish officials to Libya aim to back its affiliated militia and the Muslim Brotherhood group. It is doing this in addition to legalizing the presence of its forces in Libya, despite the illegality of the maritime agreement signed between Turkey and the former Government of National Accord (GNA).

The Libyan analyst stressed that Turkey wants to send a message to the whole world that it is present in Libya upon a legitimate agreement, and that the Geneva Agreement, which stipulated the exit of all mercenaries and foreign forces from Libya, does not include the Turkish forces.

To conclude, Al-Awjali said the recent visit of the Turkish Defence Minister to Tripoli sent negative messages to the Libyan people when the latter was received only by Turkish soldiers on Libyan territory.