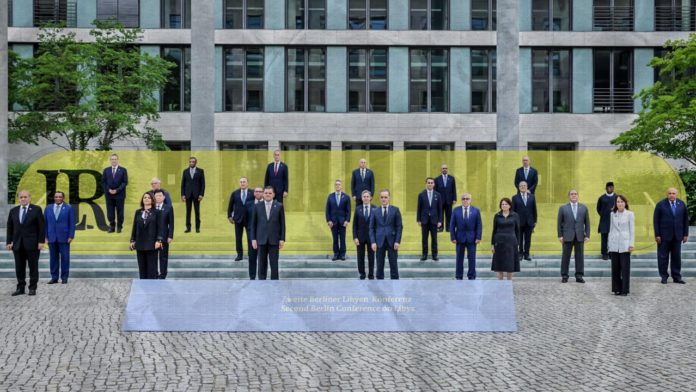 On Wednesday, the Berlin II Conference on Libya reiterated the call for the immediate “withdrawal of foreign mercenaries from Libya,” according to the Italian news agency, Nova.

The Conference also called for the Libyan authorities to do their part to make the December elections possible; unify the Central Bank of Libya (CBL); and ensure an equitable distribution of oil revenues. These are the main points of the final declaration adopted today at the Second Berlin International Conference on Libya.

The 58-point document is divided into six sections Introduction, Political Process, Security, Economic and Financial Reforms, Compliance with International Humanitarian Law and Human Rights, and the Follow Up). The conclusions are largely identical to the 51-point draft anticipated in recent days by Nova.

On Wednesday, the United Nations, the African Union, the European Union, and the Arab League met for the Second Berlin Conference on Libya. One of the novelties compared to the previous conference is the inclusion of Libya as a “full member.” The conclusions recognized the progress made since the first conference in January 2020; given that the hostilities have ceased; a ceasefire is in force; the oil blockade has been lifted; a provisional executive authority has been established, and the Government of National Unity (GNU) was approved by the Libyan Parliament.

The Conference also called on the parties to do more to ensure the holding of elections, ensure that its results are accepted by all parties, allow a mutual, proportional, balanced and sequential withdrawal of foreign armed elements, starting immediately with the removal of foreign mercenaries from Libya. It underscored the necessity of applying and enforcing UN sanctions, including through national measures, against those who violate the arms embargo or the ceasefire.

The draft also includes a step to support Libya in its effort to protect its southern borders and control the cross-border movement of armed groups and arms. “It also called for the establishment of Libyan national security, police, and military forces under a unified civil authority, in addition to the demobilization and disarmament without delay of armed groups and militias in Libya, the integration of suitable personnel into civilian, security, and military state institutions.”

The draft reaffirmed the need to combat terrorism in Libya in accordance with the United Nations Charter and international law, calling all parties to disassociate and stop any support for UN-designated terrorist groups and individuals.

The text urges all actors to cease the financing of military capabilities, or the recruitment of mercenaries; and indicates the commitment to strengthen the monitoring mechanisms of the UN arms embargo, and national authorities.

On the political front, the draft final statement calls on Libya’s Presidential Council and the GNU to take further steps to unify the country (Point 26). It also urged all actors to restore and respect the unity of the executive, legislative, judicial, and other national institutions.

In particular, the document called on the Libyan authorities, led by the Parliament, to make the necessary preparations for holding free, fair, and inclusive national elections in December, and to “define the constitutional basis for elections and enacting electoral legislation” (Point 28).

The statement also calls on the Libyan Political Dialogue Forum (LPDF) to take measures, if necessary, that would facilitate the elections within the framework of the political roadmap.

Still, on the subject of elections, the member states of the United Nations and international and regional organizations are encouraged to send election observers, in coordination with the Libyan authorities and the United Nations Support Mission in Libya (UNSMIL).

The draft also requested the United Nations Security Council, the African Union, the Arab League and the European Union to act against Libyan spoilers of the political pro

The draft also requested the United Nations Security Council, the African Union, the Arab League and the European Union to act against Libyan spoilers of the political process, by imposing sanctions.

According to the statement, regarding economic and financial reforms, the GNU should improve the provision of basic services to the Libyan people, restore water and electricity supplies, medical and education services, fight corruption, revive the national economy and engage in the reconstruction of the country’s infrastructure.

The conference participants, according to Nova, are ready to support the reunification efforts of the CBL and ask for “a transparent, responsible, and equitable distribution of wealth and public resources between the various Libyan geographical areas, including through decentralization and support for municipalities.”

The text also urges the Libyan Parliament to adopt a national budget, noting that this would contribute to a more transparent and equitable distribution of funds.

As for assets frozen by the UN, the “willingness to consider changes, where appropriate, to the freezing of assets at the request of the Libyan government is stated.” Such changes, the text continues, “could be considered appropriate once Libya’s transition period is completed, with sovereign decisions taken by a legitimately elected government, President and Parliament with full national legitimacy.”

With respect for international humanitarian law and human rights, it urges “the interim government and all parties in Libya to fully respect international humanitarian law and human rights, to protect civilians and civil infrastructure, internally displaced persons, migrants, refugees, asylum seekers and prisoners, including through engagement with UN entities.” It also requires the screening of all detainees and the immediate release of all those who are illegally or arbitrarily detained.

Regarding the migrant crisis, the text asks the Libyan authorities to close detention centers for migrants and asylum seekers, align the legislative frameworks on migration and asylum with international law, and internationally recognized standards and principles.