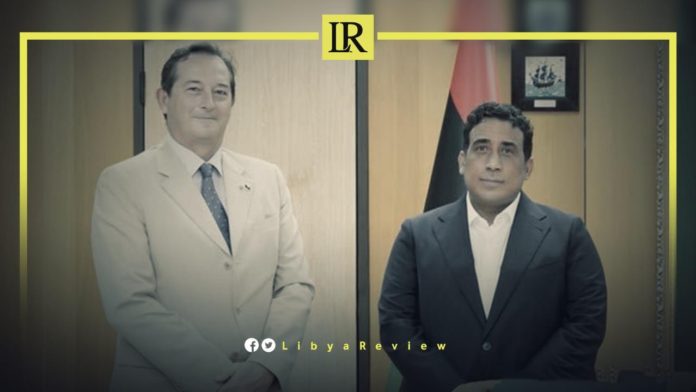 On Sunday, the Head of Libya’s Presidential Council, Mohammed Al-Mnifi, praised the efforts of the outgoing United Kingdom (UK) Ambassador to Libya, Nicholas Hopton, in developing Libyan-British relations during his tenure in Libya. Al-Mnifi stressed the depth of the bilateral relations between the two friendly countries.

This came during a meeting with the UK diplomat in Tripoli, ahead of his departure from Libya as his tenure as Ambassador ended.

During the talks, Hopton praised the facilities provided by the country’s authorities during his diplomatic tenure in Libya. He also hailed the Presidential Council’s efforts in maintaining security and stability in the country, unifying institutions, paving the way for national reconciliation and preparing for the upcoming elections.

Ambassador Hopton will leave Libya and will be replaced by Caroline Hurndall at the end of August.

During the past few days, the British Ambassador met with the Governor of the Central Bank, Al-Siddiq Al-Kabeer, the Chairman and Executive Director of the Libyan Investment Corporation, and the Minister of Interior, Major General Khaled Mazen. They met in the context of developing cooperation with British companies, in order to open the door for foreign investments into the country.

Libya has been marred in conflict since the overthrow of long-time leader Moammar Gaddafi in 2011. In March, international mediation efforts resulted in the creation of the Government of National Unity (GNU), which is set to lead the country to elections in December.