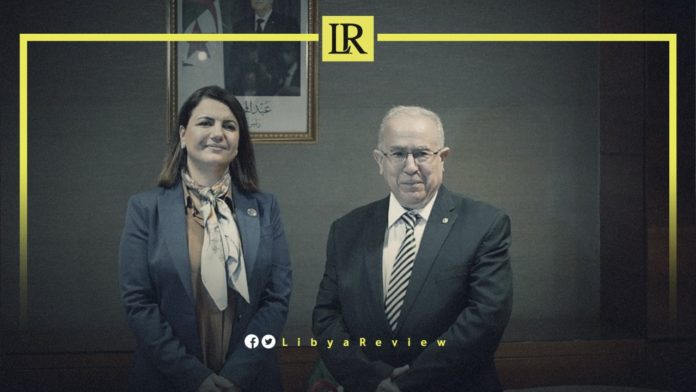 On Monday, Libyan Minister of Foreign Affairs in the Government of National Unity (GNU), Najla Al-Mangoush, held talks with her Algerian counterpart, Ramtane Lamamra, in Algiers.

The talks came on the sidelines of the foreign ministers meeting of Libya’s neighbouring countries, which aims to help Libya hold the upcoming 24 December elections.

Lamamra praised the “depth of the distinguished relations that bind the two brotherly Libyan-Algerian peoples.” He stressed that the ministerial meeting aims to unify efforts to support maintaining stability in Libya, in coordination with the African Union.

In turn, Al-Mangoush expressed her thanks and appreciation to her Algerian counterpart for his keenness to support the Libyan people, and strengthen all endeavours to achieve a comprehensive political settlement of the crisis, and unify Libya’s national institutions.

The foreign ministers of Algeria, Libya, Egypt, Sudan, Niger, and Chad, in addition to the Congo which chairs the African Union, along with the Secretary-General of the Arab League Ahmed Aboul Gheit, the African Union Commissioner for Political, Peace and Security Affairs Bankole Adeoye, and the Special Envoy of the UN Secretary-General to Libya, Jan Kubis attended the conference.

In his opening remarks, Lamamra stated that “the meeting comes as Libya’s neighbouring countries have been contributing to resolving the crisis.” He stressed the need “to continue the efforts aimed at unifying state institutions in Libya, and achieve reconciliation,” and continue to work, “to withdraw mercenaries and foreign forces from all Libyan soil as soon as possible.”