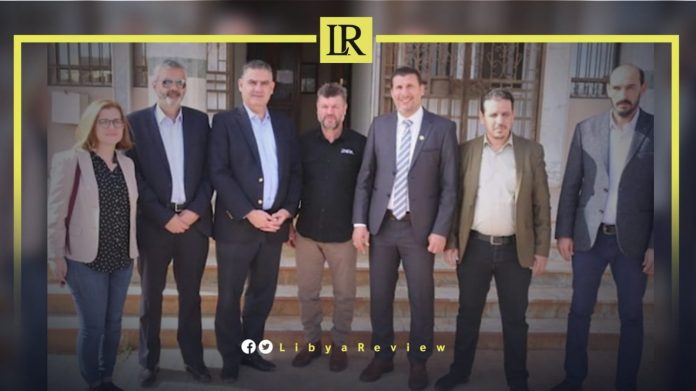 The Mayor of the eastern-Libyan city of Al-Marj, Walid Salhoub met with the Ambassador of Greece to Libya, Ioannis Stamatekos and his accompanying delegation. They discussed a number of issues including the security of the upcoming Libyan elections, and investment opportunities for the municipality.

Ambassador Stamatekos inquired about the mechanism of the municipal election commission, and ways to secure it. During the meeting, housing projects, approved infrastructure plans, water and sewage issues and the main treatment plant, slum rehabilitation were presented to the Greek delegation. Investment opportunities for the municipality and the proposed sites for investment inside and outside the city were also discussed.

Notably, over 2.8 million of Libya’s seven million residents have registered to vote. Both Presidential and Parliamentary elections were slated for 24 December, but in early October the Libyan Parliament postponed the legislative elections until January.

Head of the High National Elections Commission (HNEC), Emad Al-Din Al-Sayeh previously announced the adoption of new measures to prevent fraud in the upcoming national elections. “It is a huge logistical operation, even more complicated than updating the voter registration system, as it is a sensitive and accurate process. The entire electoral process depends on it,” he explained.

Earlier this month, HNEC opened the registration process for the December elections. These are seen as a step toward normalcy after nearly ten years of war in the country.

On Wednesday, Libya’s election commission decided to rule out 25 candidates, including Saif Al-Islam Gaddafi from the planned Presidential elections. In a statement, the commission said that Saif Al-Islam was ineligible to run, compounding the turmoil surrounding the vote.

Disputes over the election rules, including the legal basis of the vote and the eligibility of candidates threatens to derail an internationally-backed peace process aimed at ending a decade of factional chaos. A number of candidates initially approved by the commission have also been accused of possible violations by political rivals.

Interim Prime Minister, Abdel-Hamid Dbaiba initially vowed not to run for President when he took up his role in February of this year. He also failed to resign from his position, three months before the vote as required by the contested election laws.