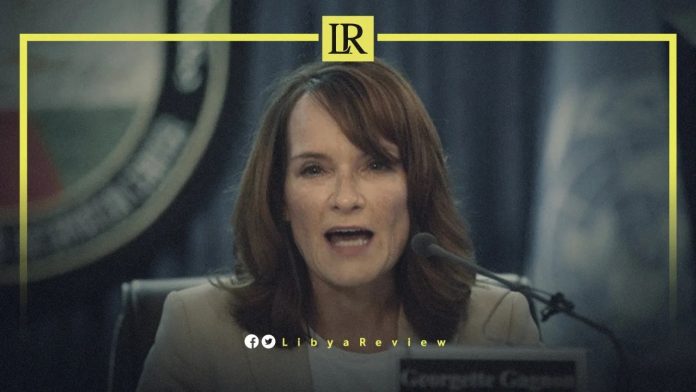 The Assistant Secretary-General, Resident Coordinator and Humanitarian Coordinator for Libya, Georgette Gagnon, called on the young women and men of Libya to actively participate in the elections, to seize this unique opportunity by voting and participating as candidates. This way they can elect real representatives and reshape the political class in Libya.

“Your engagement in political life as a critical catalyst and force of change can transform the political environment and culture, and contribute to putting Libya further on the path of democracy, stability, unity, and prosperity,” Gagnon added during her speech at the National Youth Conference on Saturday in the capital, Tripoli.

During her speech at the conference, Gagnon expressed her happiness with this diverse and vibrant gathering of young women and men from all social and political spectrums in Libya who gathered under one roof to talk about peace, reconciliation and the future.

She added that 6 years ago, the United Nations (UN) Security Council adopted the ground-breaking resolution 2250 (2015) on Youth, Peace, and Security which recognizes that “young people play an important and positive role in the maintenance and promotion of international peace and security”.

“This resolution and two others stress the critical importance of young peoples’ participation and leadership in peace and security efforts and urge all UN member states – including Libya – to amplify the voices of youth in decision-making and peace processes and to recognize their vital role in building and sustaining peace,” she noted.

Gagnon said, “you are the ones who can and will contribute to the peaceful and prosperous development of a better future for Libya.”

Gagnon cited the words of the UN Secretary-General that “all of our hopes for a better world rest on young people. Sustainable development, human rights, and peace and security can only be achieved if we empower young people as leaders and enable them to unleash their full potential.”

She continued that, “we, at the UN, guided by the relevant UN Security Council resolutions and the UN’s Youth 2030 Strategy are mandated and committed to working with and empowering youth, engaging and listening to young people’s priorities and needs, and supporting young peoples’ real participation in decision-making and leadership in shaping the future of their countries.”

Gagnon stated that, “two days ago, with the UN Special Envoy, we met with representatives of the Libyan Youth Forum. We listened with appreciation and admiration to their briefing about efforts to mobilize Libyan youth from all regions and all political and cultural backgrounds, to lead bottom-up community-based national reconciliation, and to ensure the effective participation of youth in the political life of Libya, particularly in the upcoming elections.”

She highlighted that, “the Security Council also stressed the importance of free and fair Presidential and Parliamentary elections that are inclusive and credible and underlined the importance of arrangements to ensure the full, equal and meaningful participation of women and the inclusion of youth.”

“During my recent visits to entrepreneurship and livelihood programs in Tripoli and Benghazi where the UN, private sector, and civil society are investing in partnerships with youth as agents of change, I spoke to young Libyans who are already on the frontline of change – leading the use of new technology to network, create and speak out for change,” Gangon added.

She continued by saying that, “youth are also a critical line of defence, and important agents of change, in the fight against hate speech and incitement to violence (particularly online and around elections) as they are the most affected by this epidemic.”

“We, at the UN, are here to listen to the voices of young people, to invest in young people, and to promote and support the involvement of young women and men meaningfully in all decision-making that affects their lives,” she concluded.