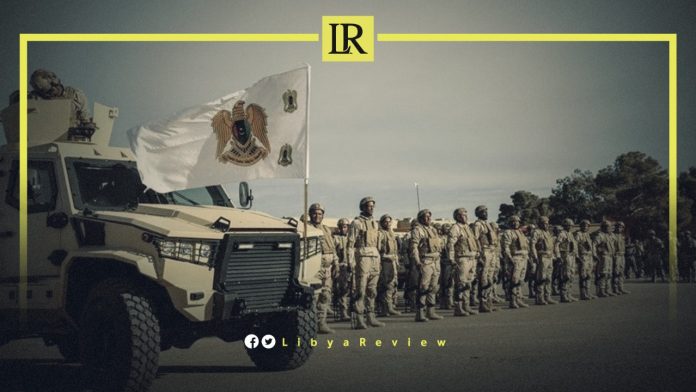 On Sunday, the Libyan National Army (LNA) arrested a terrorist cell in the southern city of Sebha. The cell was planning to commit hostile acts aimed at destabilising the country.

In a statement, Major General Khaled al-Mahjoub, Director of the Moral Guidance Department of the LNA said that the cell members, including the wanted terrorist Ali Bakir, were arrested in a security raid on their quarters which was described as a “pre-emptive strike” against terrorism.

He indicated that other two Egyptian and Pakistani terrorists were also arrested during the operation.

Al-Mahjoub added that the terrorists were preparing to attack civilian gatherings, noting that they were closely related to the mercenary group that was arrested in October 2020.

He confirmed that main goal is to establish a nucleus for the so-called “Caliphate Army” in the South of the country.

Al-Mahjoub stressed that the LNA Forces will continue their efforts for uprooting terrorism to preserve the security and stability of the country.

He explained that the presence of those extremist groups in the South of the country during this period are aimed at undermining the planned electoral process, which is scheduled to be held on December 24th.

Parliamentary and presidential elections were called for by a United Nations (UN) political forum last year as part of a roadmap to end Libya’s civil war. But disputes over the planned vote threaten to derail the UN-backed peace process.

A presidential vote in the first round is set for December 24th, and parliamentary elections have been delayed until January or February. However, the rules for the election have not yet been agreed.

Libya has been in chaos ever since the 2011 overthrow and killing of long-time leader Moammer Gaddafi in a NATO-backed uprising, with warring rival administrations battling for power.

Since the downfall of Gaddafi, Libya also has become a key route for irregular migration from Africa into Europe, across the Mediterranean Sea.