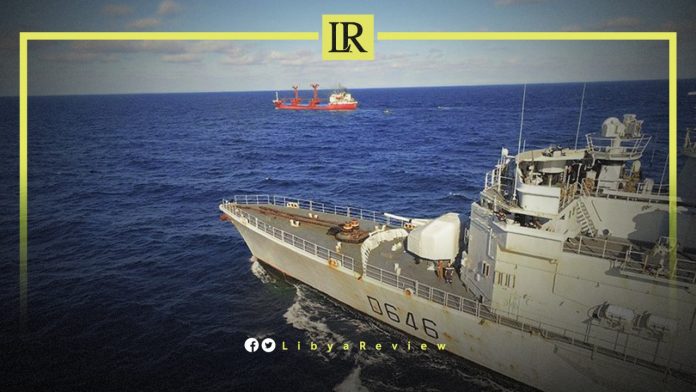 The European Union’s Operation IRINI, which monitor’s the arms embargo on Libya announced that since the start of its activities in 2020, it has been able to carry out over 6,000 inspection missions.

IRINI stated that these inspections included ships and boats, that were on their way to Libya.

In February, the Commander of the operation, Rear Admiral Stefano Turchetto, stated that they are seeking to “provide security and stability in the Mediterranean, the Sahel, and Libya.”

During a meeting with the European Union Special Representative for the Sahel, Emanuela Claudia Del Re, Turchetto said, “IRINI in Greek means peace, and peace is the effect we seek for Libya and the entire Sahel region.”

On 8 January, Operation IRINI intercepted a merchant ship in the Mediterranean to verify and examine its documents, pursuant to United Nations Resolution 2292. The inspectors opened several containers suspected of being loaded with illegal material.

IRINI also intercepted a suspicious merchant ship off the Libyan coast in December. This occurred during the first operation after Turchetto assumed command in September.

In a statement, IRINI stated said that “after two days in rough sea and strong winds, although the sea state conditions were still marginal, HS NAVARINON Boarding Team was inserted by helicopter and inspected a Merchant Vessel suspected of violating the UN Arms Embargo on Libya.”

It added that “a Special Forces Team once having secured the area, verified the ship’s documentation and inspected, according to the UN Resolution 2292, several containers suspected to be loaded with unlawful material. Nothing suspicious was discovered, after which the ship was released and proceeded towards the next port of call.”