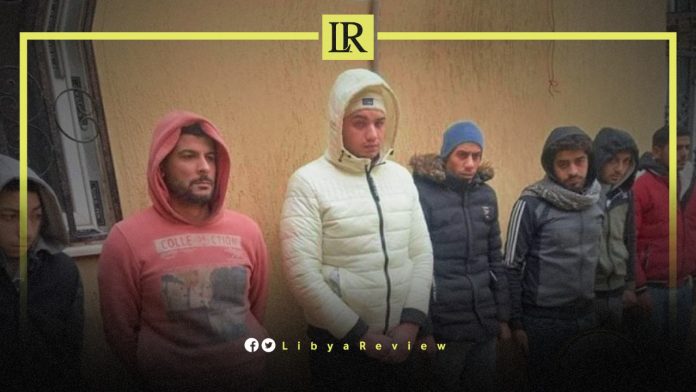 The Rescue and Criminal Investigation Department of Libya’s Bir Al-Ashhab Security Directorate, in cooperation with the Tobruk Human Frogs Brigade, raided a warehouse used to house illegal migrants. During the raid, the security forces arrested 40 Egyptian migrants. They were referred to the competent authorities, to complete the legal procedures and deport them.

This is part of the efforts made by the Bir Al-Ashhab Security Directorate, to combat crime, and track illegal migration shelters.

The first 121 people were rescued early Saturday morning. “Our crew spotted the boat in distress and launched our RHIBs [Rigid Inflatable Boats] to evacuate the people from the unseaworthy boat,” Sea-Watch said via Twitter.

Sea Watch’s airplane crew spotted a small boat carrying eight people, who were saved in a second rescue operation. “On board our ship, the crew is now providing a total of 129 people with basic necessities such as medical care, food, and fresh clothing,” it added.

Over 20,000 migrants who were returned to Libya by the Libyan Coast Guard in 2021 have gone missing, according to the relief organisation Oxfam.

In the last five years, over 80,000 migrants were intercepted. Thousands of people deported to Libya, or incarcerated in official detention institutions risk winding up in “clandestine” facilities, Oxfam stated.

According to Oxfam, such facilities are managed by traffickers, or local armed groups who “survive on the abduction industry.” It cited the repercussions of the Italy-Libya agreement struck in 2017, which was criticised by Oxfam. It urged the Italian Parliament to cancel the agreement, and reintroduce search-and-rescue efforts in the central Mediterranean. Several accounts of “abuse and torture” suffered by unaccompanied adolescents were featured in the report.