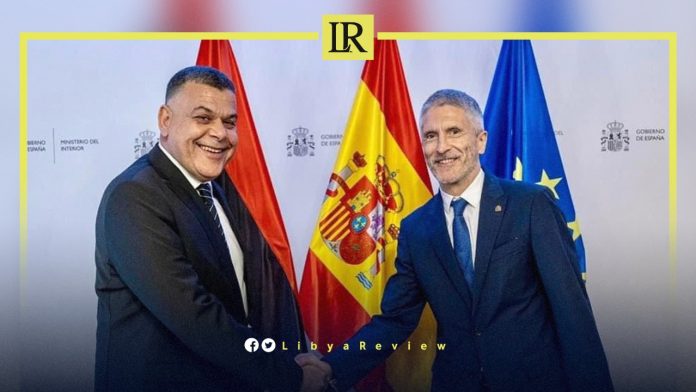 On Monday, the Minister of Interior of Libya’s Government of National Unity (GNU), Khaled Mazen met with his Spanish counterpart, Fernando Grande-Marlaska in Toledo. They discussed several issues, including returning stolen artefacts.

The meeting was attended by the Ambassador of Libya to Spain, Walid Abu Abdullah and the Assistant Director of the General Administration of Training, Brigadier General Fathi Aoun.

This came on the sidelines of a workshop on methods of international support for a disarmament, demobilisation, and reintegration (DDR) program.

The meeting also discussed prospects for joint security cooperation between the two countries, including training programs to develop and qualify security and police cadres, and benefit from Spanish expertise in this field.

The two sides agreed to prepare a memorandum of joint security cooperation in several security fields. As well as discussing facilitating visas for Libyan citizens from the Embassy of Spain in Libya.

According to Fawasel Media, the meeting discussed cooperation between Libya and Spain with respect to illegal migration, combating terrorism and organized crime, money laundering, protecting antiquities, and the granting of visas.

In March, Libya’s Prime Minister-designate, Fathi Bashagha met with Larrache in Tunis. They discussed the latest developments in Libya’s political situation, stressed the need to avoid violence, and support peaceful and legal solutions.

They affirmed the need to hold Parliamentary and Presidential elections within a specific date, Bashagha’s media office said.

Bashagha also confirmed the “great relations with Spain” and the possibility of working together in various fields, such as energy, counter-terrorism, combatting organized crime, agriculture, water security, and others.