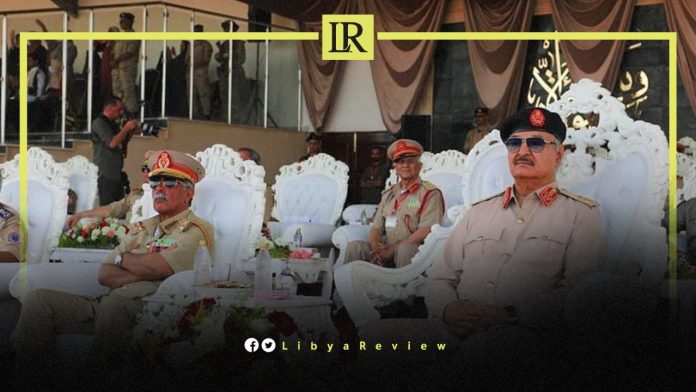 The Commander-in-Chief of the Libyan National Army (LNA), Field Marshal Khalifa Haftar praised the role of Arab countries in supporting the LNA in its war against terrorism.

In his speech during the graduation ceremony of the 54th batch of the Military Academy, Haftar said that “without the LNA and the support of Arab countries, Libya would have turned into a major empire of terrorism that threatened the world.”

He stressed that without the popular support, “Libya would not have a place on the world map.”

“We believe that we are on the right path despite all the challenges facing us in our long struggle. We are committed to our pledge to continue the process of completing the construction of our national army in an exemplary, modern, and advanced style,” he added.

Notably, the Director of the Moral Guidance Department of the LNA, Major General Khaled Al-Mahjoub said that the counter-terrorism operation in the south of the country “has achieved its goals.”

In an interview with Sky News Arabia on Tuesday, Al-Mahjoub said that the LNA has intensified its reconnaissance operations, and its pursuit of IS elements. He confirmed that they “dealt a strong blow to IS.”

The senior official revealed that they are cooperating with several countries, to combat terrorism in Libya.

On Monday, the LNA announced that they destroyed a number of military vehicles, and arrested an IS terrorist commander in Qatrun.