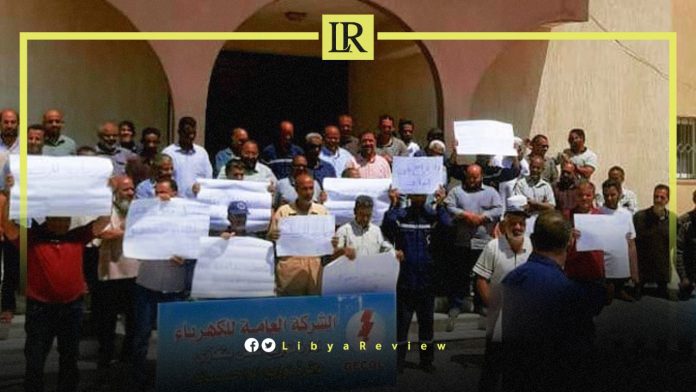 On Monday, workers at the General Electricity Company of Libya (GECOL) staged protests in several cities. This is to demand the disbursement of their overdue salaries, an increase in salaries, and to provide them with health insurance and security.

It added that they will hold several meetings next week to discuss escalatory steps. These include holding state officials and the company’s board of directors responsible for the safety of employees.

Head of the Union, Masoud Bashir Bin Naji denounced the complete disregard of these demands by the company’s Board of Directors, and the government. He confirmed that employees will continue to stage several protests, until all their demands are met.

Since 2011, Libya has been suffering from a deficit in energy production. GECOL has recently adopted a program of load shedding hours in various cities and regions. These often reach more than 12 hours a day during the summer months.

There is also a trend concerning the theft of copper cables by criminals. This has contributed to the almost permanent interruption of power.

Libya is working to obtain multiple sources of energy to solve its crisis. It currently contracts with neighbouring countries such as Egypt and Algeria, to make up its deficit.

Earlier this year, Egyptian Electricity Minister, Mohamed Shaker said that they are planning to increase the capacity of the electrical linkage line with Libya to 2,000 megawatts (MW).

In press statements, the Minister said that the basic capacity of the electricity line amounted to 100 MW at a voltage of 220 kilovolts (KV), and the capacity was increased in January 2020 to 150 MW.

Shaker said they have also begun to raise the voltage of the line between Egypt and Ethiopia to 500 KV from 220 KV. He revealed plans to establish electrical linkage with various European countries through maritime cables. These include project studies on linkages with Cyprus, Crete, and Greece.