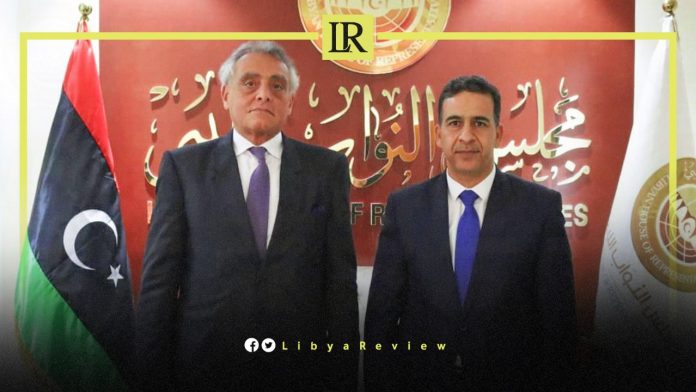 On Monday, the First Deputy Speaker of the Libyan Parliament, Fawzi Al-Taher Al-Nuiri met with the Italian Ambassador to Libya, Giuseppe Buccino in Tripoli.

According to the Parliament’s Spokesman, Abdullah Blaiheg, they discussed the progress of the political process, and the latest developments in Libya.

Notably, Blaiheg stated that they have requested Libya’s regulatory bodies to present a report on the spending of the Government of National Unity (GNU) to date.

“The Parliament also addressed the supervisory bodies to urgently submit detailed reports to the committee on its follow-up to the disbursement of public money, since the beginning of the GNU’s mandate,” he said.

They also asked for a report on the work of the Central Bank of Libya (CBL).

Bkaiheg added that this came during the last meeting that was held by the Parliament. “The meeting concluded by addressing the High National Elections Commission (HNEC) to urgently submit a report regarding the measures it has taken to remove obstacles to holding the elections, after they could not be held on 24 December 2021.”

“The report should also include what is required of the various authorities for holding the Libya Presidential and Parliamentary elections, Blaiheg noted.