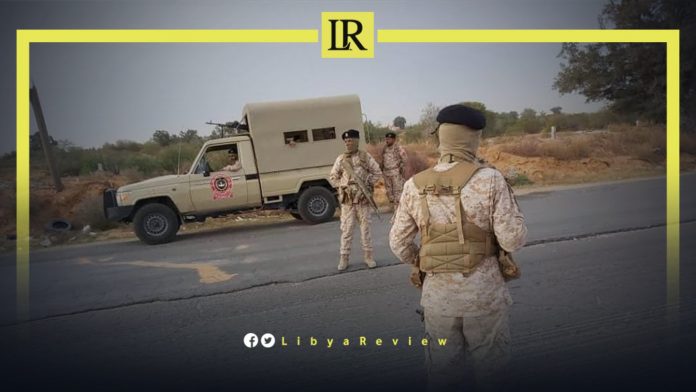 A prominent commander of the Islamic State (ISIS) group has surrendered to the 444 Brigade of Libyan Special Forces in Bani Walid city, 180km Southeast of the capital Tripoli.

Mustafa Abdel Hamid bin Dallah has been included on the General Attorney’s wanted list since 2016 following the launch of the Al-Bunyan Al-Marsous Operation to liberate the coastal city of Sirte from the extremist group.

Bin Dallah has been targeted by the United States (US) Africa Command (AFRICOM) twice. His place of residence in Bani Walid was also raided several times in collaboration with US forces under air cover before his arrest failed. The man was reportedly responsible for the security of ISIS senior leaders besides securing supplies for the organisation.

Bin Dallah is also accused of bringing in the “Emir” of ISIS in Libya, nicknamed Abu Muadh Al-Iraqi, and other leaders.

Last year, the Counter-Terrorism Force in Bani Walid arrested Ashraf al-Khazmi, a relative of ISIS Commander Embark al-Khazmi, who was arrested by the Joint Operations Force of the outgoing Government of National Unity (GNU) in September 2021.

Following Sirte’s liberation in 2016, Bin Dallah has been living in the hide out in the valleys of Bani Walid.

Earlier this month, the 128th Reinforced Brigade of the Libyan National Army (LNA) announced that it raided a hideout belonging to the terrorist organisation ISIS in the Al-Jufra area, in central Libya.

The Brigade said in a statement on Facebook that the ISIS elements dug an underground trench, which was used by them as a headquarters for planning their terrorist activity in the region. However, it did not reveal whether they arrested any people or clashed with ISIS members.

The LNA is leading a massive campaign against ISIS militants in southern and central Libya. In a statement, the Southern Commander of the LNA, Major General Al-Mabrouk Sahban, stated that forces “carried out a qualitative military operation, during which they targeted a number of ISIS militants and destroyed armoured vehicles.”

He also stated that the operation aimed to “hunt down the Takfiri terrorists that threaten security and stability and who are active in looting, theft, sabotage, and smuggling activities.”

Moreover, the Director of the Moral Guidance Department of the LNA said earlier that the operation of the LNA against terrorist organisations in the South of the country “has achieved its goals.”

In an interview with Sky News Arabia, he said that the LNA intensified its reconnaissance operations, and the pursuit of ISIS elements. He confirmed that the LNA “dealt a strong blow to ISIS.”

The LNA senior official revealed that there is cooperation with several countries in efforts to combat terrorism in Libya. He noted that the LNA enjoys great popular support.

The LNA took control of the entire city of Qatroun, in the South of the country, after launching military operations targeting terrorists.

The LNA announced that it destroyed a number of military vehicles, and arrested an ISIS commander in a military operation in the southern town of Qatrun.