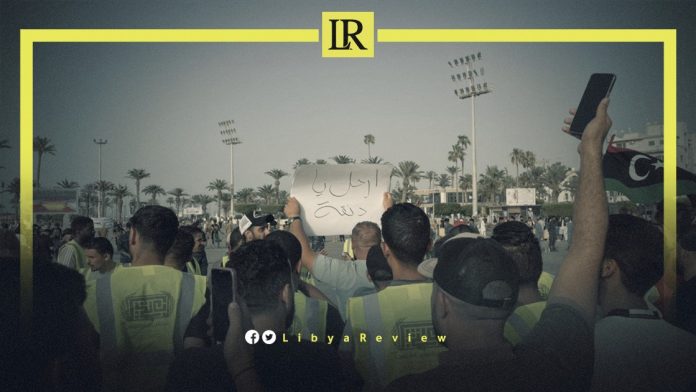 Libyan cities witnessed several large-scale protests that started last Friday, calling for the downfall of all government bodies and institutions as well as the departure of mercenaries. They expressed their rejection of the poor living situation, political division and the lack of services.

On Saturday, Libyan activists vowed to continue their protests until “all the ruling elites step down from power.” They asserted that they would escalate their campaign by setting up tents in city squares and declaring civil disobedience until their goals were achieved.

The demonstrations in Libya included the capital, Tripoli, and a number of major cities in the West, East and South of the country. Angry protesters set fire to the headquarters of the Libyan Parliament in Tobruk, after storming its main gate.

These protests received wide international reactions. The United Nations (UN) called for calm, adding that “the time has come to listen to the demands of the Libyan youth.” The United States (US) also expressed deep concern about the political, economic and financial stalemate that led to scenes of unrest in Libya.

These protests had several reasons, which prompted the demonstrators to take to the streets to express their rejection of the ruling system and the policies in which the country is run, raising many demands, on top of which is solving the electricity crisis and improving the living situation.

The electricity sector in Libya continues to suffer from long and frequent interruptions at a time when the country is experiencing a severe heat wave. The Government of National Unity (GNU) headed by Abdelhamid Al-Dbaiba failed to put an end to the crisis, despite multiple promises to solve it.

During his candidacy for the Libyan Political Dialogue Forum (LPDF) in February 2021, Al-Dbaiba pledged to solve the electricity crisis in no more than 10 months. More than 18 months have passed since taking power and the situation is getting worse. Observers confirm that the main reason is the lack of commitment to the maintenance of stations, theft of wires and the slowdown in establishing new stations.

Last week, a picture was taken of a Libyan citizen sitting in the street next to an electric generator to operate the oxygen machine for his sick child.

The incident led to widespread controversy on social media, and was the first spark that prompted activists to call for massive demonstrations and protests to demand a solution to the electricity crisis.

In February 2021, the LPDF, under the auspices of the UN, chose a new executive authority, consisting of a presidential council and a Government of National Unity (GNU), to supervise the elections last December. Libyans had hoped that the elections would take place, as more than 2.5 million citizens received their electoral cards.

With the failure of the executive authority to hold elections last December, and the expiration of the legal period granted to it last June 21st, according to the road map agreed in Geneva, it was expected that the GNU would hand over power to the new government mandated by the House of Representatives (HoR) headed by Fathi Bashagha. This did not happen, increasing the political division in the country.

The Bashagha government tried to enter the Libyan capital, Tripoli, more than once, but it failed, which prompted it to take the city of Sirte as its headquarters.

These intense political differences and divisions prompted the Libyans to demand the overthrow of all political bodies, as the people are tired of temporary phases, and hope for an end to the conflict between institutions and access to elections and a permanent constitution.

Although many Libyan institutions have expired, many officials still cling to their positions and refuse the peaceful transfer of power.

Other institutions that expire will be added to the GNU and the Presidential Council, on top of which is the High Council of State (HCS) (the former National Congress), which expired in February 2014.

The term of office of the Libyan HoR expired in October 2015, the Constituent Assembly of the Constitution in March 2016, and the Board of Directors of the Central Bank of Libya (CBL) in September 2016.

These out-of-state institutions are getting salaries in the millions. The CBL revealed its expenditures during the first five months of 2022, within the budget of the GNU, which amounted to more than 30 billion Libyan dinars.

Lack of Services and Increasing Corruption

Officials for these salaries do not provide services to the people. Most of the Libyans live in the high cost of living, high prices, shortage of basic commodities, lack of treatment and medicine, in addition to lack of security and education.

Libyans also suffer from a shortage of cash, as thousands are queuing in front of banks to receive their overdue salaries. Additionally, there is a great shortage of petrol stations, as the citizen needs to stand for hours to get his car fuel in a country that has a huge wealth of oil.

Libyan citizens also suffer from a shortage of bread, due to the high prices of bread ingredients, which has sparked a major crisis and unprecedented crowding and queues in front of bakeries.

Even identity card and official document services are not available to Libyan citizens, and long queues line up in front of the passports and civil registry.

All this lack of services coincides with rampant corruption in all sectors. Not a single day passes without the regulatory agencies revealing thefts of millions of public money.