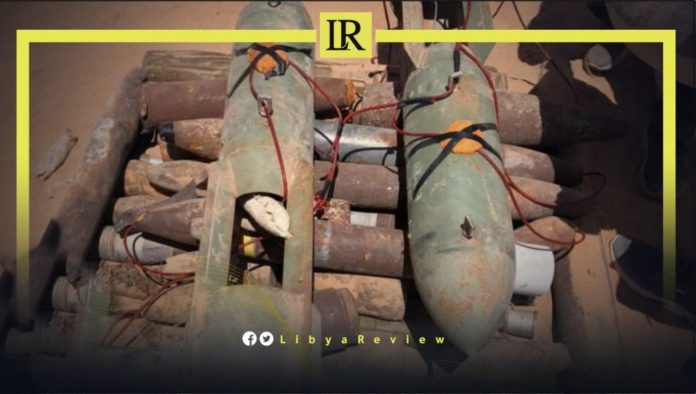 Libyan authorities have managed to dismantle two tons of explosives, mines, and remnants of war from the Al-Hira region, in the west of the country.

The Office of Explosives Dismantling of the Technical Affairs Department of the Criminal Investigation Agency carried out a wide sweeping campaign in the Gharyan and Jafara areas.

The statement added that a specialized team continues to destroy the large number of explosives that were found over two consecutive days.

Last month, the Oil Crescent Security Directorate in Libya announced that it had removed a large amount of explosives and remnants of war in Brega, following a landmine explosion. It pointed to the presence of explosives on a beach extending between the third and second districts of Brega city.

A team from the General Directorate of Explosives Detection and Disarmament entered the city to remove the explosives along the seashore. This is in cooperation with the Oil Crescent Security Directorate, and the Sirte Oil and Gas Manufacturing Company.

The statement added that the security team began operations to survey the target area, and discovered a large group of explosives, remnants of war, and landmines.

In April, Human Rights Watch (HRW) announced that at least 130 people, mostly civilians, have been killed by landmines and abandoned or unexploded ordnance in Libya since June 2020.