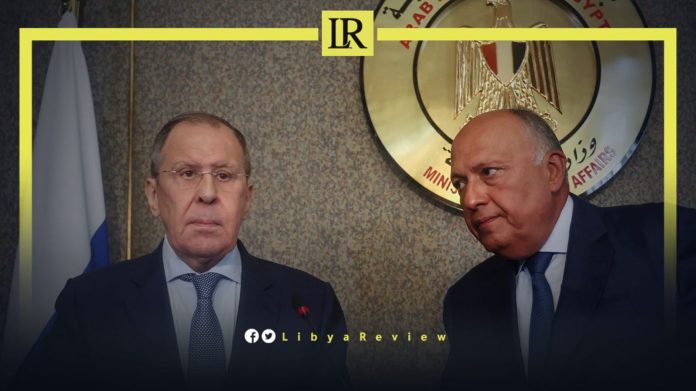 Russian Foreign Minister Sergey Lavrov began his African tour on Sunday with a visit to Egypt, where he held talks on Libya and Ukraine with his Egyptian counterpart, Sameh Shoukry.

“Lavrov and Shoukry will certainly exchange views on the situation in Libya. Moscow and Cairo are influential players in the Libyan settlement,” Russian Foreign Ministry Spokesperson, Maria Zakharova, wrote on her Telegram channel on Saturday.

She noted that the positions of Russia and Egypt on the Libyan file “coincide or, at least, do not contradict each other.”

Meanwhile, the situation in Libya country shows no signs of improvement. On Friday, armed clashes took place in Tripoli and several other Libyan cities.

Earlier on Saturday, rival Libyan factions engaged in armed confrontations in the vicinity of the intersection of the main coastal road leading to Tripoli, outside the Libyan city of Misrata.

Rival forces allied to the two main sides in a political standoff over control of the Libyan government have mobilised in the city in recent days, according to residents.

Libya has been gripped by insecurity since a NATO-backed uprising toppled and killed longtime leader Moammar Gaddafi in 2011, leaving a power vacuum armed groups have been wrangling for years to fill.

The clashes were renewed in the Libyan capital on Friday between the most prominent militias in Tripoli. They used medium and heavy weapons during the clashes. As a result, the Mitiga International Airport was closed for fear of shells and missiles falling inside it.

According to the Spokesperson for the Ambulance and Emergency Services, Osama Ali, the death toll has raised to 16 people, including 6 civilians and over 52 were injured during the clashes.

Both groups involved in the fighting are nominally loyal to Abdelhamid Al-Dbaiba’s Government of National Unity (GNU), appointed last year as part of a United Nations (UN)-backed peace process to end more than a decade of violence in oil-rich Libya.