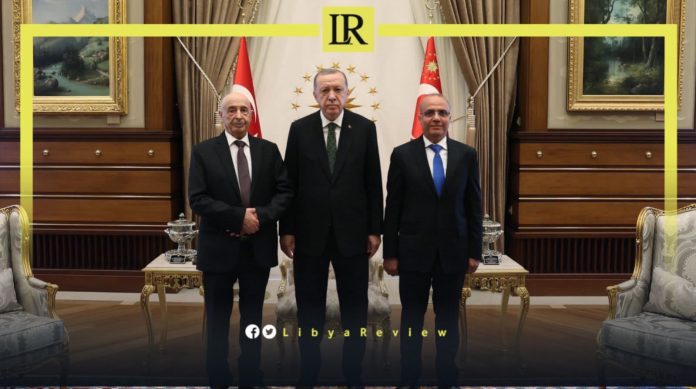 Libyan Parliament Speaker, Ageela Saleh stated that he held a “very productive” meeting with the Turkish President, Recep Tayyip Erdoğan during his visit to Ankara.

According to Turkey’s news agency, Yeni Shafak, Saleh said he wanted support from Ankara for the preservation of Libya’s territorial integrity. He added that he informed President Erdogan about the situation in Libya.

The Libyan Speaker pointed out that Turkish companies are playing an important role in Libya’s reconstruction process. “We need to cooperate with these companies in order to complete their old contracts, so that they can contribute to the reconstruction of Libya again,” he stressed.

Underlining Turkish companies’ role in the development of Libya, Saleh added that they want to take relations with Ankara to the next level.

“In my opinion, during this meeting, we were able to explain the Libyan picture to him [Erdogan] very clearly. We conveyed to him that the most important thing is to preserve the unity and territorial integrity of Libya. The President said that they will make all necessary efforts for the stability and prosperity of Libya,” Saleh noted.

According to the Speaker, he also had a very productive meeting with Sentop in terms of discussing the latest developments in Libya.

He added that there are several Turkish firms in Libya and their contracts are still in effect, but the majority of them were unable to complete their projects. He stressed that his main goal is to bring the Turkey-Libya ties to their prior level.

“We think that the [Libyan] government should also fulfil this task with us [Parliament]. In order for the government to complete their old contracts, they need to sit down and talk with the Turkish companies and cooperate so that they can contribute to the reconstruction of Libya again,” he said.

“When we reach an agreement, it will be presented to the High Council of State (HCS), as well as to the Libyan Parliament. Of course, after the establishment of an election board, all this work will be put to a referendum and submitted to the appreciation of the Libyan people,” he concluded.