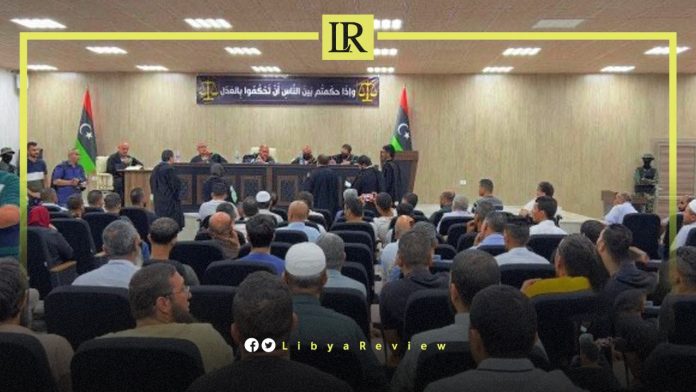 On Monday, a Libyan court adjourned the hearing of 56 Libyans accused of fighting for the Islamic State (IS) terrorist group.

The session was held by the Misrata Court of Appeal at the Anti-Crime Headquarters east of the city. It was attended by the families of the victims of the organization.

According to press sources, the defendants had been arrested during the “Al-Bunyan Al-Marsous” operation in Sirte. The court agreed to adjourn the hearing to 25 September.

In June, a prominent IS commander surrendered to the 444th Brigade of Libyan Special Forces in Bani Walid, 180 km southeast of the capital Tripoli.

Mustafa Abdel-Hamid bin Dallah has been included on the General Attorney’s wanted list since 2016, following the launch of the Al-Bunyan Al-Marsous operation.

Bin Dallah has been targeted by the US Africa Command (AFRICOM) twice. His place of residence in Bani Walid was also raided several times, in collaboration with US forces under air cover. He was reportedly responsible for the security of senior IS leaders, and securing supplies for the organization.

He is also accused of facilitating the travel of the “Emir” of IS in Libya, nicknamed Abu Muadh Al-Iraqi, and other leaders.

The Al-Bunyan Al-Marsous military operation was launched by the former Government of National Accord (GNA) against the Islamic State to expel it from the coastal area of Sirte. Militias, with international political and military support represented by American air support, participated in the operation.

On 5 May 2016, the GNA announced the formation of an operations room to launch and lead the operation to expel terrorists from the area between the two cities of Misrata in the west, and Sirte in the center. About 354 fighters were killed in the operation, while 2,000 were injured during the operation.