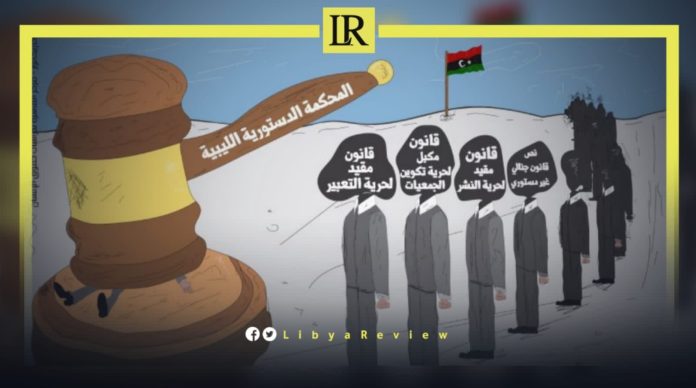 On Monday, the Cairo Institute for Human Rights Studies (CIHRS) said that “Libyan civil society organisations and citizens regained a fundamental right after the Supreme Court’s decision to reactivate the constitutional court.”

The Institute added that “Libyans’ right to resort to the judiciary to challenge the constitutionality of laws is a fundamental right that has been suspended for six years.”

It noted that this decision “guarantees recourse to the judiciary in challenging the constitutionality of laws, in light of Gaddafi’s repressive legislative arsenal.”

CIHRS confirmed that the Supreme Court’s decision makes it possible to appeal against repressive laws restricting basic rights, such as Penal Code provisions 206 & 207. These provide the death penalty for civil society work and expressing opinions critical of the authorities.

“Reactivating the Constitutional Court also provides the possibility of challenging the legislative faction that regulates the electoral process, and facilitates steps towards democratic transition in Libya,” the Institute added.

Politicians, jurists, and political parties have called for years for the reactivation of the constitutional court. This is so that it can decide on the authorities of current bodies, especially after certain political bodies were exploited due to the absence of the court.

Tensions have been rising for months in Libya as two prime ministers vie for power; raising fears of renewed conflict two years after a landmark truce.