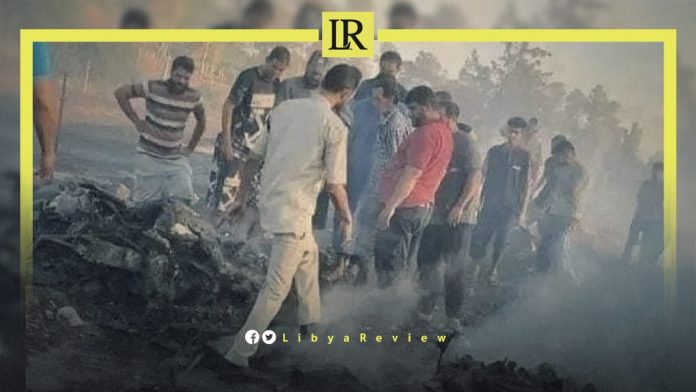 The absence of the Libyan state, and the prolonged division of the military institution since the overthrow of late leader Muammar Gaddafi over a decade ago has provided an opportunity for drones and other aircraft to freely roam the country’s airspace.

Many Libyans believe that their country has become a battling ground for various intelligence agencies. Libyan politicians have stressed the importance of unifying the military institution, to preserve national sovereignty and territorial integrity.

An American drone was destroyed on the outskirts of Benghazi on Sunday evening by the Libyan National Army (LNA). It announced that its air defences destroyed an unidentified reconnaissance drone, armed with two missiles, after illegally entering the airspace.

The 319th Reconnaissance Wing, frequently flies reconnaissance, surveillance, and offensive missions over Libya. This is part of the US Naval Forces in Europe and Africa [USAFE-AFAFRICA], in addition to the MQ-9 Reaper ER, which also has the RQ-4B Global Hawk in its inventory.

According to local and international reports, the volatile situation in Libya has allowed foreign countries to freely fly their drones over the country. This includes combing the desert to detect IS hideouts, or to monitor the loose military and security situation in the country.

Gamal Shallouf, head of the Silphium Institute for Studies and Research, said that the activity of unmanned aerial systems (UAS) in Libya was not only limited to monitoring, but also to conducting military operations.

He pointed out that the LNA has shot down several drones, including the Q-9A Predator B unmanned aerial vehicle (UAV) belonging to the Italian Air Force over the town of Tarhunah in western Libya.

The frequency of these reconnaissance missions has increased since 2014, especially to monitor the situation in the cities of Sirte and Derna. As this was when IS sought to turn the two cities into its strongholds. This prompted a flurry of UAV’s over their skies.

In November 2019, the US Department of Defense announced that it had lost a drone over Tripoli, claiming that the remotely piloted aircraft (RPA) was “unarmed” and was conducting operations to “assess the ongoing security situation [in Libya] and monitor violent extremist activity.”

It justified that “these operations are necessary to counter terrorist activity in Libya, and are fully coordinated with the appropriate government officials.”

Silphium monitors air traffic to and from Libya, especially those transporting weapons. The number of drones Turkey lost during the recent conflict has not been revealed, but there were at least three confirmed takedowns in June 2019 alone. The UN believes more TB2’s were downed in battle, prompting Turkey to send dozens more to compensate for these losses.

The growth of the civil drone market has resulted in many threats utilizing low-cost UAV’s. These have become a threat to national security, and important infrastructures including prisons, airports, and other sensitive sites where traditional security and defence measures are easily defeated