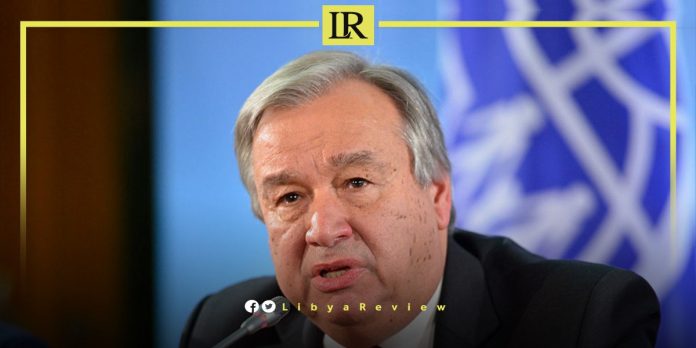 The UN Secretary-General, Antonio Guterres stressed the importance of maintaining peace between eastern and western Libya, ending violence, and expediting the holding of elections.

During a press conference, Guterres said that the cessation of hostilities in Libya is fundamental. He added that it “is necessary to reach an agreement between the Libyan Parliament and the High Council of State (HCS), allowing for the legal amendments necessary to hold the elections.”

He stressed the need for all external parties involved in the conflict to support a settlement process.

Earlier this month, Guterres called on all political actors and institutions in Libya to “exercise responsible leadership in order to prevent worsened long-standing disagreements that could lead to further instability.”

In a report addressed to the UN Security Council, Guterres added that the “outcomes of the Cairo and Geneva talks represented massive progress that all parties should benefit from.” He also urged the relevant Libyan institutions to “finalize the constitutional basis, and pave the way for holding elections without further delay.”

Guterres reiterated the importance of maintaining the progress made on the security track, since the signing of the ceasefire agreement in October 2020. He hailed the work of the 5+5 Joint Military Commission (JMC), and encouraged the Libyan authorities to “take more practical steps in order to unify the armed forces, in addition to preparing for disarmament, demobilization, and reintegration.”

Guterres said that the UN will “continue to support the 5+5 JMC to implement all the terms of the ceasefire agreement, including the implementation of the action plan related to the periodic and balanced withdrawal of mercenaries, foreign fighters, and forces.” He added that they remain “committed to supporting the work of the Libyan ceasefire monitors, in establishing a monitoring mechanism in Sirte.”

Guterres noted that “Libyan oil belongs to all Libyans and should not be held hostage to political strife.” As well as “respect and preservation of the independence of the sovereign economic and financial institutions in Libya, including the National Oil Corporation (NOC) and the Central Bank of Libya (CBL).” He called for the prosecution of those responsible for impeding the use of resources.