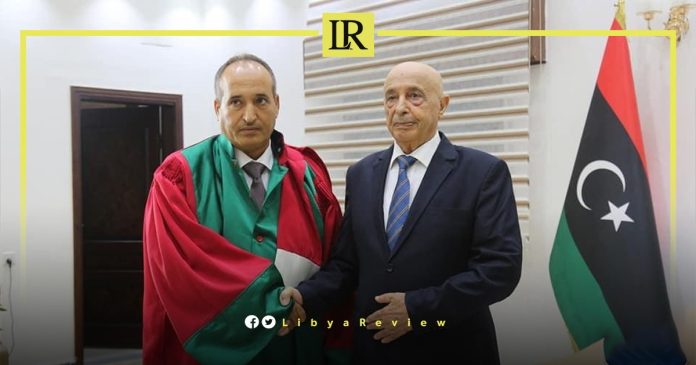 On Sunday, the newly appointed Libyan Chief Justice of the Supreme Court, Abdullah Burazizah, took the legal oath before the Speaker of the House of Representatives (HoR), Ageela Saleh.

The Libyan Parliament voted unanimously to approve the appointment of Burazizah, to replace Mohamed Al-Hafi. This came during a session of Parliament held at its headquarters in Benghazi, on Thursday.

The Member of Parliament’s (MP) approval to name Burazizah as the new Libyan Chief Justice of the Supreme Court came after he was nominated by the Court’s General Assembly and the High Council of State (HCS).

Burazizah was appointed a member of the Supreme Court chamber since 2017, with origins in the southern region of Libya.

He also provided a number of training courses for the centre’s staff and established branches in various regions and cities across the country in the fields of forensic medicine and counterfeiting.

During his career, Burazizah took into account the principle of the judiciary’s independence from politics, and maintaining the unity of the judiciary in all cities and regions. This was unlike other institutions that suffered from the decade-long division due to political turmoil.

In 2013, he signed an agreement for judicial and criminal cooperation with the Head of the Forensic Medicine Authority in Egypt, Ihsan Gorgy, which aims to enhance ways of cooperation and exchange of expertise between the two countries.

The Supreme Court in Libya is the highest judicial authority that has jurisdiction as a constitutional court and a court of cassation in civil, commercial, and legal affairs.

The Supreme Court also has jurisdiction as an administrative court, a special court for electoral appeals, in addition to its role in issuing legislation.