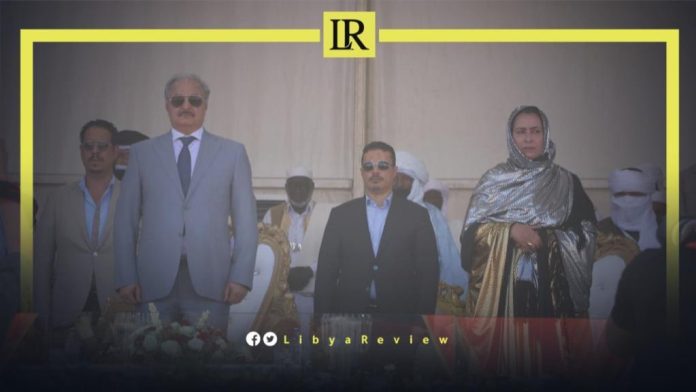 On Monday, the Commander-in-Chief of the Libyan National Army (LNA), Field Marshal Khalifa Haftar said, “We are racing against time in search of a way out of the crisis, through reunification and reconciliation.”

During his visit to the southwestern town of Ghat, Haftar said: “the national interest motivates us to unite our ranks, and enhance confidence to face Libya’s challenges.”

Last month, Haftar called on the Libyan people to save the flailing nation.

In his speech during his visit to the city of Kufra, Haftar said: “The sacrifices of the Libyans were never in order for the corrupt to enjoy a life of luxury with public money, and for the honourable citizen to live below the poverty line.” He stressed that “the martyrs did not pay their lives for the country to become booty.”

“The Libyan people should not wait for a political class or a foreign party to relieve them of their suffering. No one will save Libya, break its captivity, and build its roadmap, except for the people themselves by protecting their army. The decisive solution remains in the hands of the people, who have to lead the scene by themselves to recover their rights, and build their state. “The Libyans have the right to wonder where their country’s money goes,” he added.

In reference to the situation in Kufra, Haftar said that “all successive governments did not give the city of Kufra the attention it deserves.” He pointed out that “Kufra, and all Libyan cities have the right to receive adequate healthcare and the best levels of education, rehabilitation, and public services.”