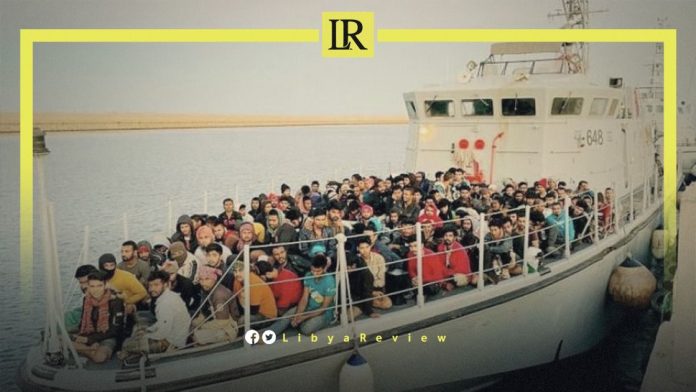 On Monday, the Tripoli Security Directorate said that the “forces of the Gharbi Police Station arrested a foreign gang, intending to smuggle a group of expatriate workers through one of the coastal ports.”

The directorate said that the members of the gang received $2,700 from each migrant for transporting them by rubber boats across the Mediterranean. The statement did not reveal the identity of the gang, nor their nationalities.

The statement pointed out that a member of the investigation department “disclosed important information that contributed to developing a plan, and setting up a tight ambush to arrest the group.”

The accused have confessed to the charges, and the necessary legal measures have been taken against them.

Earlier this month, Jean-Claude Samouiller, President of Amnesty International in France condemned the deliberate sorting of migrants coming from Libya by the Italian authorities, saying that “it is a flagrant violation of international law.”

In press statements, Samouiller said that “after more than ten days of deadlock, Italy finally authorised a ship from the NGO SOS Humanity, flying the German flag, to dock in the Sicilian port of Catania. But the Italian authorities want to sort out the migrants they will welcome on board the boat.”

He stated that Italian Foreign Minister, Antonio Tajani announced that the authorities will sort out the migrants: “only minors, pregnant women, and sick people have been authorised to disembark this Sunday morning. The ship’s 35 adult men remained on board.”

“Italian authorities must urgently allow all people on the ship to disembark as soon as possible,” said Julia Hall, Amnesty International’s Deputy Director at the Europe Regional Office.

“Italy legitimately expects other EU Member States to share responsibility for people seeking asylum, but this does not justify imposing measures that only increase the suffering of already traumatised people,” Hall added.