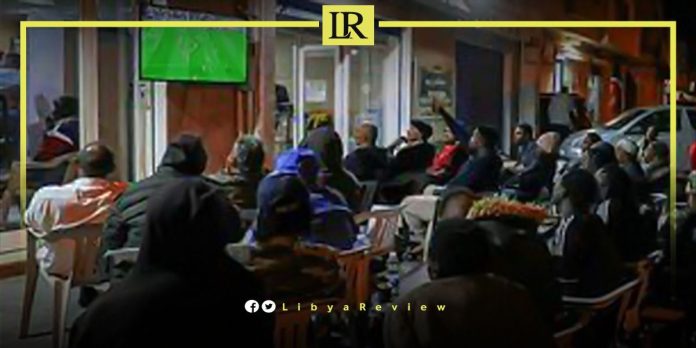 Hundreds of football fans gather in front of huge screens in Libyan parks to watch the daily World Cup matches, a welcome escape in a country wracked by conflict.

Libya’s public spaces agency has set up giant screens in parks across the capital, Tripoli allowing fans to watch matches for free under the autumn sun. The largest is in a seafront park, next to the iconic Martyr’s Square.

“It’s a great initiative,” said Walid Al-Amari, a one-time parliamentary candidate who has watched every match since the tournament kicked off on 20 November.

“Libyans love sports. Youths don’t care about politics, which has only brought them division and chaos,” he said.

The country has endured repeated conflicts, in the decade-long political crisis since the overthrow of Muammer Gaddafi. Sports are one of the few leisure activities available to bored youths — and football is by far the most popular.

Perched on ubiquitous white plastic chairs, or cross-legged on the floor, spectators glue their eyes to the screen, while children munched on candy floss or ran across the park.

“I think this has a huge effect on our morale, and is wiping away some of the negative things that have been weighing us down with the current political situation,” Al-Amari said.

Mohamad Trabelsi, a 68-year-old retiree, agreed. “Being able to watch it for free is beautiful,” he said. “It brings together hundreds of young people in a friendly atmosphere.”

He bemoaned the fact that “so many families and young people can’t afford to watch the matches on satellite channels.” Trabelsi also regretted the fact that unlike World Cup host Qatar, Libya — a fellow hydrocarbon export giant — was far from being able to host such a tournament.

That has not stopped Libyans enjoying the event, along with other residents of the city.

Ghanaians, Cameroonians, and Ivorians, as well as Arabs from neighbouring Tunisia, Algeria, and Egypt attend the matches, and by nightfall, the park is heaving.

Taher, a young Algerian on holiday visiting friends, says the matches showed that the security situation has improved. “The atmosphere is beautiful,” he said.

Khaled, a builder from Egypt, says he usually goes elsewhere to spend his time off. But, he says, “It’s nicer watching the matches in the open air, by the sea, instead of being in a crowded, noisy cafe.”