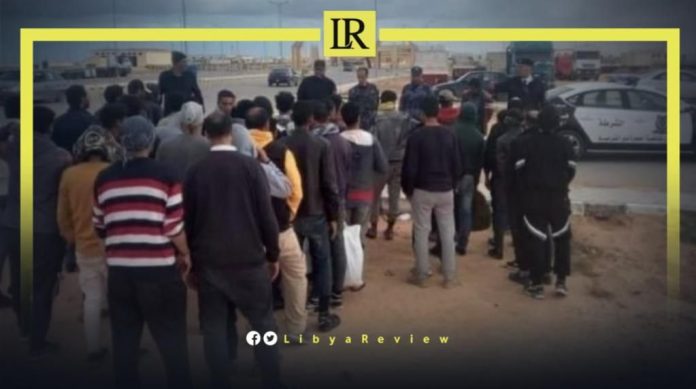 The security authorities in eastern Libya have launched an investigation into 500 Egyptian and Syrian immigrants. This came after the thwarting of an attempt to smuggle them across the Mediterranean to Europe, according to Asharq Al-Awsat newspaper.

The local authorities in Tobruk announced that the forces of the city’s naval base managed to arrest 500 migrants, off the eastern coast of the country. These included families and children, who were crammed onto a large boat, as they tried to escape to Europe.

The mayor of Tobruk, called on the security authorities to confiscate the boat, and arrest the smugglers.

The authorities did not announce the nationality of the trafficking gangs, nor the amount of money obtained from this quantity of people. They noted that smuggling operations have been on the rise since the beginning of this year, across the eastern and western coasts of the country.

In November, the International Organization for Migration (IOM) said that 20,842 migrants, attempting to cross the Mediterranean to Europe, were rescued and returned to Libya in 2022.

In a report, the IOM confirmed that 678 children and 1,089 women were among the surviving migrants. Over 514 people died, and 865 migrants were reported missing.

The IOM announced earlier that it had intercepted 235 migrants across the Mediterranean between November 13-19. The migrants were returned with the help of the Libyan Coast Guard.

Earlier, the Malta Independent newspaper published a report revealing that Maltese officials have cooperated with the Libyan Coast Guard in pushing back migrants.

He pointed out that “even when the Armed Forces of Malta (AFM) are available to coordinate a rescue, they are choosing not to rescue boats in distress because the AFM is waiting for the boat to either drift into the Italian SAR zone, or for the boat to be picked up by Libyan authorities.”

The Spokesperson noted that Malta and Libya brought up the 2020 Easter Sunday pushback, where asylum seekers were picked up by a fishing boat and sent to a Libyan detention center. Five people died, and seven went missing by the time they were picked up at sea.