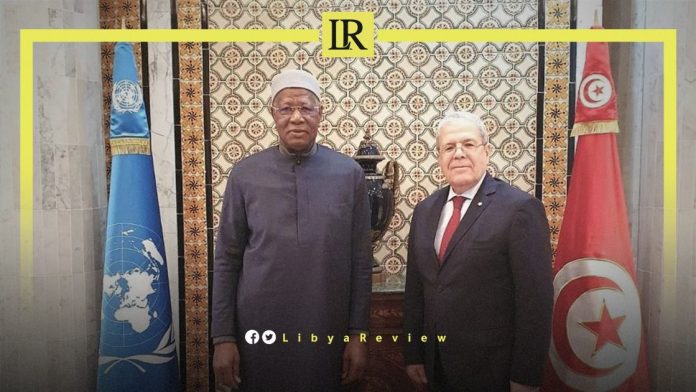 On Tuesday, Tunisian Foreign Minister, Othman Jerandi met with the UN Envoy to Libya, Abdoulaye Bathily to discuss the latest developments in Libya.

The two sides discussed ways to encourage the rival political and security parties to hold dialogues within Libya, and to agree on a way out of the crisis by holding elections as soon as possible.

Bathily affirmed the need to enhance coordination among regional actors, and to encourage all Libyan stakeholders to reach an agreement to end the deadlock.

Notably, the former Tunisian Foreign Minister, Khemaies Jhinaoui said that Tunisia was absent from the Libyan crisis. He added that “Tunisia’s rule is unclear and weak.”

Jhinaoui confirmed that he “took many initiatives to end the Libyan crisis and activate the intra-Libyan solution to this crisis. This includes tripartite initiatives with neighbouring countries, namely Egypt and Algeria.”

The former FM indicated that “Tunisia’s influence is important in order to put an end to the crisis in Libya, but it remains insufficient. This requires coordination of efforts and standing with neighbouring countries and others, in order to impose a peaceful internal solution to this issue.”

He stressed that “the stability of Libya is part of the stability of Tunisia. The interest of Tunisia dictates that the way it deals with the file be bolder, and more active. It must take the initiative to impose an intra-Libyan solution to the crisis.”

The Tunisian diplomat highlighted that the Russian-Ukrainian war and other developments the world is currently witnessing have somewhat reduced interest in Libya.

Jhinaoui pointed out that the international position remains divided. “There is relative stability in the situation in Libya. This allows Libyan patriots to take the initiative to impose a peaceful solution and internal consensus, and to push for holding elections in order to end the crisis.”

He said that the outcomes of the recent visit by Prime Minister Abdel-Hamid Dbaiba, “were normal and were not at the expected level.”

He noted that the visit “dealt with old files and issues for which solutions were supposed to be found some time ago.”