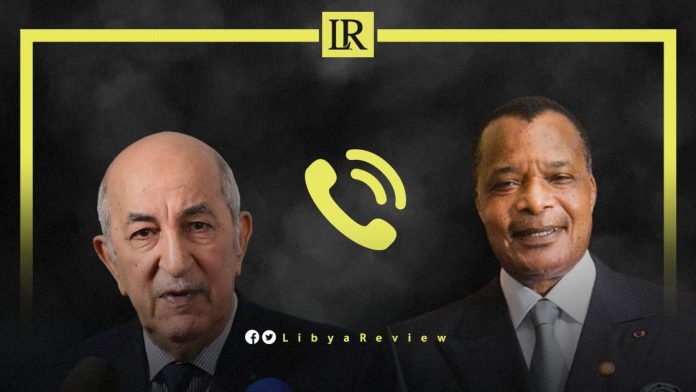 On Wednesday, Algerian President, Abdelmadjid Tebboune held a telephone conversation with Congolese President, Denis Sassou-Nguesso, the African Union’s representative to Libya, in order to discuss a number of regional issues, especially with regards to Libya.

During the talks, Tebboune underlined Algeria’s support for national reconciliation in Libya. He also expressed his hope for “success in the achievement of this noble goal, and the creation of a climate conducive to the holding of the elections.”

Tebboune and Nguesso also agreed on “strengthening the role of security authorities in combating terrorism, and maximising international efforts to expel all foreign forces and mercenaries from Libya.”

“The two presidents agreed on the importance of strengthening cooperation and coordination frameworks between the two brotherly countries regarding the Libyan crisis,” a statement said.

He also urged all Libyan parties to “engage in direct dialogue, and agree on holding elections as soon as possible, in order to put an end to the decade-long crisis.”

“Our goal is to maintain the unity of Libya and act to unify its security and political institutions, and to prevent the aggravation of division,” the diplomat added.

With regard to the Arab Summit being held between 1-2 November in Algeria, Shabira noted that “it will be an important event, as it will reach resolutions that reflect collective Arab stances toward crises, such as in Libya, Syria, Yemen, Sudan, Somalia, and Lebanon.”

The current stalemate grew out of the failure to hold elections in December, and the refusal of Prime Minister Abdel-Hamid Dbaiba to step down. In response, the country’s eastern-based Parliament appointed a rival Prime Minister, Fathi Bashagha, who has for months sought to install his government in Tripoli.