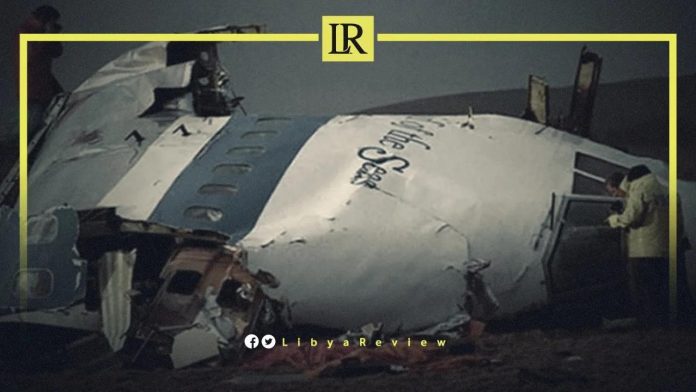 The bombing of Pan Am flight 103 took place more than three decades ago, but the families of the slain, and the Scottish community torn apart would never forget the hellish scenes seen when the flaming wreckage crashed down in pieces in their town, according to a report published by Saudi-based Arabnews newspaper.

For some, the arrest last week of a Libyan national charged with having made the bomb that downed the jet over Lockerbie on 21 December 1988, offers the prospect of long overdue justice for the 270 victims of the disaster and their families.

For others, though, confidence in the judicial system, and the joint US-Scottish investigation that led to the latest arrest was shaken long ago. These were by uncertainties that continue to hang over the trial and conviction in May 2000 of another Libyan, Abdelbaset Al-Megrahi, who in 2001 was found guilty of carrying out the bombing.

Last week, 71-year-old Abu Ajila Masoud, an alleged former intelligence officer during the rule of Muammar Gaddafi, appeared in a US court accused of being the bomb maker.

It is a stunning development in a case which, for many relatives of the dead, has never been satisfactorily settled. Masoud’s anticipated trial represents an unexpected opportunity for the many remaining doubts surrounding the Lockerbie disaster to be resolved once and for all.

Key among them is the suspicion, which has persisted, that the Libyans were falsely accused of a crime that was actually perpetrated by the Iranian regime.

Iran certainly had a motive. On 3 July 1988, five months before the bombing, Iran Air flight 655, an Airbus A300 carrying Iranian pilgrims bound for Makkah, had been shot down accidentally over the Strait of Hormuz by a US guided-missile cruiser, the Vincennes.

All 290 people on board were killed, including 66 children and 16 members of one family, who had been traveling to Dubai for a wedding.

In 1991, a subsequently declassified secret report from within the US Defense Intelligence Agency made it clear that from the outset, Iran was the number-one suspect.

Ayatollah Mohtashemi, a former Iranian Interior Minister, was “closely connected to the Al-Abas and Abu Nidal terrorist groups,” it read.

He had “recently paid $10 million in cash and gold to these two organisations to carry out terrorist activities and … paid the same amount to bomb Pam Am flight 103, in retaliation for the US shoot-down of the Iranian Airbus.”

The evidence implicating Iran piled up. It emerged that two months before the bombing, German police had raided a cell of the terror group Popular Front for the Liberation of Palestine — General Command and seized a bomb hidden in a Toshiba cassette player, just like the one that would be used to blow up Pan Am flight 103.

Yet in November 1991, it was two Libyan intelligence operatives, Al-Megrahi and Lamen Khalifa Fhimah who were charged with the murders. The case against them was circumstantial at best.

After years of negotiations with Gaddafi’s government, the two men were eventually handed over to be tried in a specially convened Scottish court in the Netherlands. Their trial began in May 2000, and on 31 January 2001, Al-Megrahi was found guilty and Fhimah was acquitted.