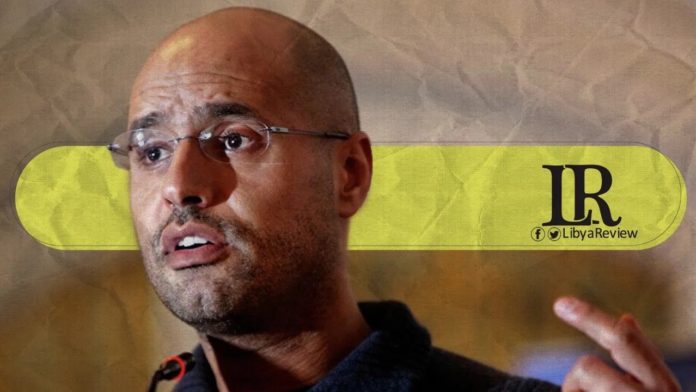 The British newspaper, The Times reported that it had received reliable information that the British-educated son of the former Libyan leader, Muammar Gaddafi is planning to stand in the forthcoming elections in Libya.

In its report, The Times explained that Saif Al-Islam Gaddafi has not been seen or heard from publicly since he was captured ten years ago. In a call arranged to clarify his relationship with a team of advisers acting on his behalf, he confirmed his identity and that he was well. As he re-emerges into public life, he has been reaching out to western and other diplomats in order to establish his credentials. The International Criminal Court (ICC) continues to seek him for war crimes.

Saif Al-Islam, 48, will make a public statement soon, according to his advisers, after years of hiding. He intends to run in the 24 December elections, but they argue his candidacy announcement would be premature until the country’s electoral legislation is adopted, as opponents may try to insert a clause barring him from running.

In 2011, he was apprehended by rebel forces, and sentenced to death in 2015. Two years later, he was said to be released, but reportedly stayed in hiding in Zintan. According to a security officer, he is wanted in Libya, as well as by the ICC.

His candidacy has allegedly received Russian support. In 2019, two Russian political operatives sent to help him run for president were apprehended in Tripoli, and records from their discussions were recovered. A PowerPoint presentation suggested that flash mobs be organised in the Hague under the slogan, “Safe with Saif.”

It’s unlikely that the United States would allow his return. Secretary of State, Antony Blinken was a major backer of the Nato intervention in 2011, and others see Saif Al-Islam as too close to the Kremlin.

According to The Times, Saif Al-Islam can rely on nostalgia for his father’s rule’s relative stability. The country’s subsequent plunge into civil war, after the deposing of the Gaddafi regime in 2011, has prompted many Libyans to question whether the uprising was a mistake.

Thousands have been killed since the rebellion began, and the country is virtually divided between the west and east of the country, politically and militarily.

Some believe he has a decent chance of winning the elections. Apart from the nostalgia, he has sizable support in the south and central Libya. His advisors, in particular, are relying on internal rather than international support.

Wolfram Lacher, a Libya analyst at the German think tank SWP, said: “Not having been out in the open, he’s become this figure on to which fantasies are projected, notably saviour fantasies. I’m sceptical he can retain this saviour image once he’s out in the open and once he has to deal with real-life questions facing Libyans.”

Saif Al-Islam Gaddafi received a PhD from the London School of Economics — though there were accusations it was partly ghostwritten — and became Libya’s public face, as it was welcomed by the West back in from the cold after Tony Blair’s “deal in the desert”.