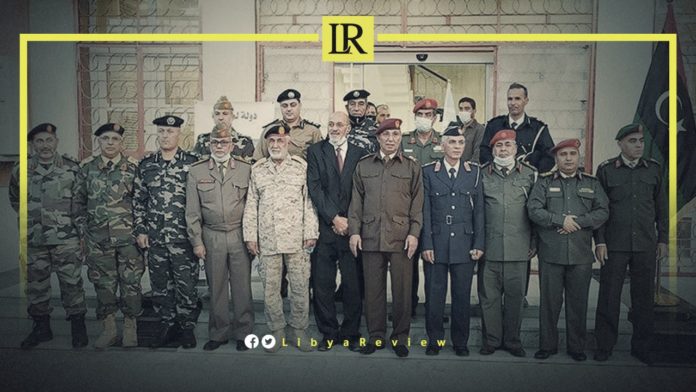 The 5 + 5 Joint Military Commission (JMC) has called on the Libyan Presidential Council and the Government of National Unity (GNU) to implement the ceasefire agreement signed in October, and to freeze military agreements signed with foreign countries, until the elections in December are held.

In its statement after a meeting in Sirte on 13-14 August, the JMC called for the freezing of all military and security MoUs signed with Turkey and Russia, “so that the Commission can begin the procedures for implementing the exit of all mercenaries, fighters, and foreign forces from the country.”

The JMC’s request was well received by the Libyan people; however a number of senior figures aligned to Turkey attacked the Commission, and accused it of “deviating from its course and interfering in political affairs.”

Implementing the terms of the ceasefire agreement is one of the primary tasks of the JMC, and the agreement stipulates the need to freeze military and security agreements, and memoranda of understanding with foreign countries.

Khaled Al-Mishri, Head of the High Council of State (HCS), who is close to the Muslim Brotherhood, called on the JMC to “distance itself from talking about political affairs or international agreements.” He claimed that the security agreement signed by the outgoing Government of National Accord (GNA) with Turkey in 2019 is legitimate, and expresses the will of the Libyan people. However the GNA’s agreement was not approved by Parliament, and a Libyan court ruled that the agreement was invalid.

Moreover, the Army Chief of Staff appointed by the GNA, Mohamed Al-Haddad has also rejected the demands of the Commission, describing them as “a deviation from its course and an interference in the political affairs entrusted to the existing executive authority.”

Notably, the “Stability Support Apparatus” headed by Abdel-Ghani Al-Kikli (Ghnewa), issued a statement declaring its rejection of the Commission’s demands, calling for it “not to exceed the competencies entrusted to it.”

At the same time, the Commander of the Western Region Operations Room, Osama Al-Juwaili, also rejected the demands of the JMC, saying the Commission has exceeded its competencies.