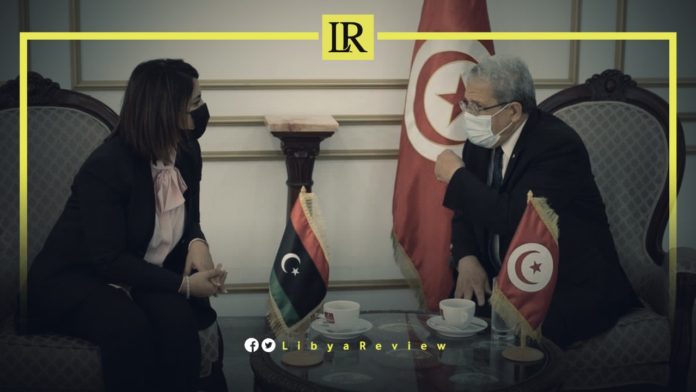 On Thursday, a ministerial delegation from Libya consisting of Minister of Interior, Khaled Mazen and Minister of Foreign Affairs, Najla Al-Mangoush, arrived in Tunis, according to a statement by the official Spokesman of the Government of National Unity (GNU), Mohamed Hamouda.

Hamouda added that the delegation will hold intensive talks with their Tunisian counterparts to agree on a unified health protocol, as a necessary step for re-opening the land borders, and to resume flights between the two countries.

Last week, Tunisian President Kais Saied announced the complete closure of the Ras Jedir and Dhehiba-Ouazen border crossings with Libya, despite efforts by the Libyan authorities to reopen the crossings. The Tunisian authorities justified their step as part of the health measures being taken to prevent the spread of COVID-19.

Analysts in the two countries believe the Tunisian decision to completely close the crossings, although ostensibly over health, was in fact the result of wariness at the risk of terrorists infiltrating from Libya.

On 8 July, Libya announced the closure of air traffic and borders with Tunisia due to a spike in COVID-19 cases, and the outbreak of the Delta variant of the virus.