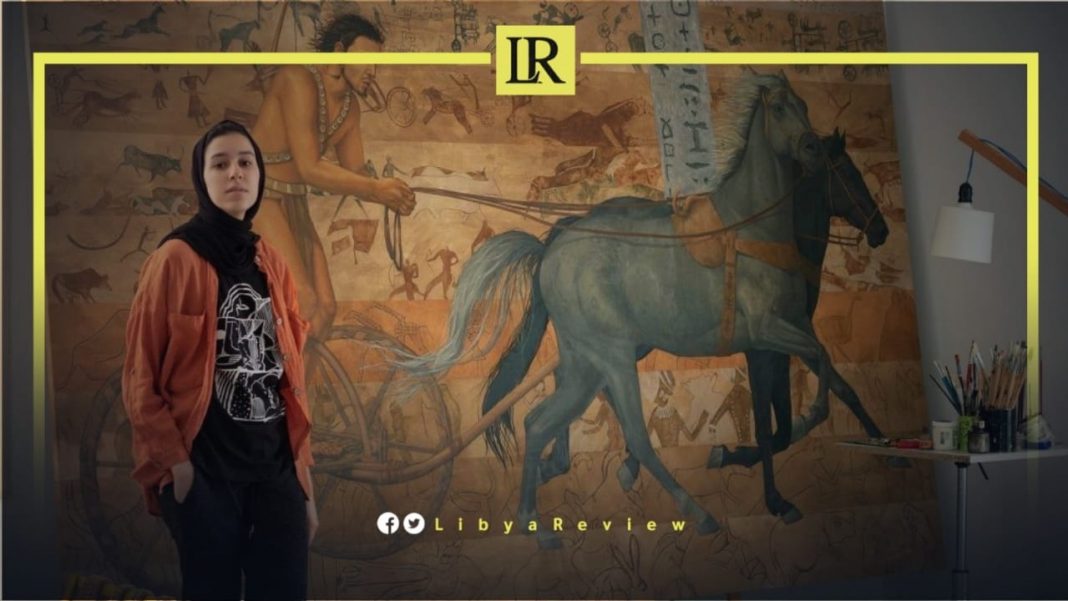 Libyan Painter, Shefa Salem offers remarkable canvases in the show “I am Libya,” indicating that audiences are ready to learn about Libya’s historical heritage.

What does it mean to call yourself a Libyan? How can a sense of connection to the country and its people be reconstructed while maintaining variety, starting with the deepest roots of Libyan culture? These are the issues that artist Shefa Salem is addressing in her first solo show, I Am Libya, which debuted a few weeks ago at the Barah Arts and Culture Center in Benghazi. It is set to travel to Tripoli’s old city in early December.

“We live in a civilization that is visual. However, because Libya’s ancient history was largely oral rather than visual, we have a difficult time visualising it. Although some cave paintings have been discovered in Libya, the majority of them are from societies that had created a unified written language at the time, such as the Egyptians. Alternatively, we have works written by archaeologists from other nations who are conducting studies in Libya,” she said.

The artist is addressing this void by reimagining Libyan history through large-scale paintings: “My work is a reconstruction that is based on credible sources, such as books, academic publications, and archaeologists’ studies.”

Given Libya’s previous history, as well as the current situation, in which many cultural nuances have been lost and history has been exposed to revisionism, this type of work is more vital than ever. In a context where competing forces are continuously on the verge of wiping out Libyan culture, having the younger generation become interested in uncovering Libyan identity is critical for a reconstruction process, as well as sustaining current conditions.

Salem, who was born in Benghazi in 1996, graduated from the University of Benghazi in July with a bachelor’s degree in architecture. She has a warm and pleasant disposition, but she also exudes fierceness and strength, which can be seen in her paintings, where socio-political themes collide with feminism and history.

“Art has always been a love of mine. At first, I was copying photographs and training myself how to do realistic work until I started developing my own art in 2018,” she said.

Despite the fact that she did not grow up in an artistic family, she connected with a relative in Tripoli who is also an artist. They began a discourse between their two cities that are culturally disparate, in order to urge each other to do better.

Her show is part of a wider body of work dubbed “The Identity Project,” which signalled her crossover from more intimate paintings to broader historical subjects: “However, even my self-portraits have a socio-political grounding,” the artist points out. “They demonstrate how the country’s crisis affects one individual directly.”

Kaska, Dance of War is one of the first paintings she completed for the Identity Project. Kaska is a traditional Libyan dance performed by the Timihu tribe. 5,000 years ago the first depictions of this dance appeared on the walls of Egyptian temples in Deir El-Bahari. Libyan troops were depicted dancing Kaska, and struggling for water with sticks. Salem’s realistic painting depicts two sides of the battle, firmly split by a red line: warriors fighting cruelty and terrorism on the one hand, and women suffering sorrow and loss as a result of the war on the other.

Libyan Flute is one of her newest paintings displayed during the event. The artist was inspired to create the piece after reading an article in the Cambridge Libyan Studies magazine about the world’s oldest flute, which was discovered in Libya. According to the study, the Greeks embraced this instrument and made it their own, creating a mythology around it, but it truly came from Libya.

The artist reclaims the maternity of this musical instrument for Libyans in the picture by turning the Libyan territory into the shape of Cyrene, a mythological character who is the daughter of a monarch and a Naiad.

Cyrene is also the name of the locati