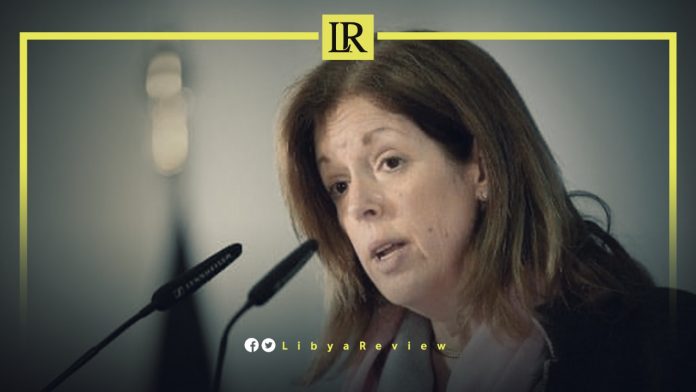 Special Adviser to the United Nations Secretary-General on Libya (SASG), Stephanie Williams confirmed that the presence of mercenaries in Libya has caused severe political, social, security, and military crises. She noted that removing them is important, but it should not be a condition for holding the elections.

In an interview with the Egyptian ‘Al-Dostor’ newsite, Williams indicated that a number of countries had hinted at imposing sanctions on anyone who obstructs the holding of elections. She pointed out that the Security Council had previously stressed the need to punish those found to be obstructing the political process in Libya.

She renewed the call to respect the demands of the more than 2.8 million Libyans, who registered for the elections to hold the elections, end the conflict, restore security and stability, and unify institutions.

It is noteworthy that private sources confirmed to “218TV” that Williams has left Cairo, and is en route to Moscow. This is part of a foreign tour that includes countries involved in the Libyan crisis.

Notably, the SASG told the Turkish Anadolu Agency on Saturday that Libya doesn’t need a new transitional government, after having five over the past decade. She said Libya has been in transition since 2011, adding that it needs to now democratically elect a government that can provide security, secure the country’s borders, and provide services to the population.

“Currently, the Libyan Parliament has formed this Roadmap Committee, which is in consultation across the country. The report is expected to be submitted to Parliament on January 25th, along with the proposals,” she explained.

Williams added that she travelled across the country, talking to Libyans and listening to their views, noting that:

“Some said that a constitutional basis is needed for the elections to continue, others wanted the draft constitution to be put to a referendum. Another group wanted the list of Presidential candidates to be subjected to some form of judicial oversight in order to open the blockage and go directly to the elections. There are people who want to be elected as MP’s. So I can say that there is not a single dominant opinion in Libya. There are various views and we are certainly involved in this political process as the United Nations. We understand the complexities of each specific option. It’s Libya’s decision to keep going.”

Williams remarked that the parties in Libya have a desire to negotiate, indicating that if there is a political agreement, then they can move the process forward.

“We have a roadmap agreed on by the Libyan Political Dialogue Forum’s (LPDF) that goes on until June of this year. I believe that a choice is still quite possible in this timeframe. This may include different scenarios. But it is possible, and I think it is increasingly important that the Libyan people have a political horizon here,” she stressed.

Williams outlined the “existence of peace and calm on the ground”, saying she doesn’t see any desire among Libyans to return to war at this time. She added that “even the rhetoric and the way they speak has changed and become political discourse: a civilized rhetoric that replaces war rhetoric.”