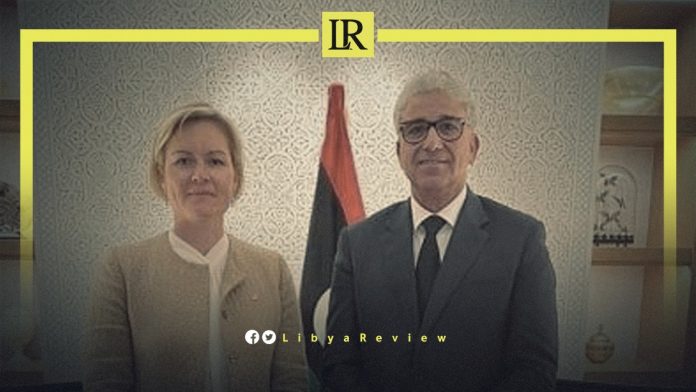 Bashagha affirmed his support for all efforts aimed at strengthening national unity, and maintaining Libya’s security and stability.

During the meeting, Bashagha pointed out the importance of cooperation with the United Kingdom regarding strategic planning. The Ambassador expressed her readiness to enhance bilateral cooperation.

On 10 February, the Speaker of the Libyan Parliament, Ageela Saleh announced the unanimous appointment of Bashagha as the new Prime Minister. Incumbent Prime Minister, Abdel-Hamid Dbaiba warned that the appointment of a new interim government could lead to war and chaos in the country. He renewed his pledge to only hand power over to an elected government.

Observers fear that Libya will return to having two opposing governments, given Dbaiba’s refusal to cede power to Bashagha’s government.

On Wednesday, the UK’s Deputy Permanent Representative to the UN, James Kariuki urged all internal and external actors involved in the Libyan crisis to refrain from any actions that could undermine stability, or deepen divisions in the country. As well as threaten to undo the hard-won progress achieved over the last two years.

Addressing the UN Security Council, Kariuki stated he strongly supported the role played by the UN Adviser Stephanie Williams. As well as called on both sides of the current impasse to accept her offer to facilitate dialogue.

He said that the National Oil Corporation (NOC) “should not be politicized, and must be able to fulfil its duties without interference.”

The British diplomat voiced his concern over the “attempts to shut down oil production, which will only lead to the detriment of the Libyan economy and its people,” noting that public institutions are “there to serve the whole of Libya and should be empowered to do so.”