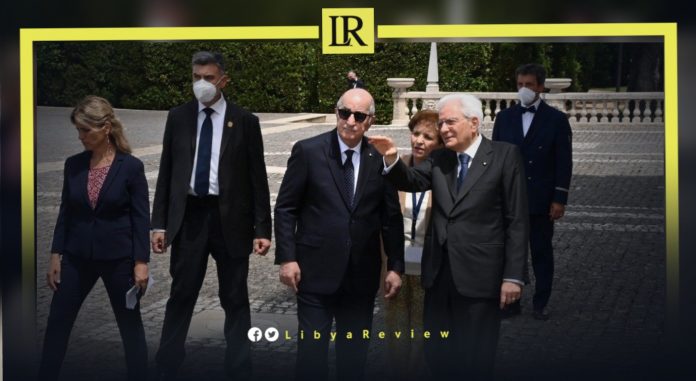 Algeria and Italy agreed to support the Libyan and Tunisian people by “intensifying joint coordination to return the two countries to the path of political safety.”

They agreed on the need to hold general elections, as the only solution to restore stability in Libya.

In a joint press conference Italy’s Sergio Mattarella and Algeria’s Abdelmadjid Tebboune said that they are ready to help Libya get out of the current impasse, and achieve stability.

The Algeria President indicated that the only way out of the Libyan crisis is holding prompt elections, and to listen to the Libyan people.

Mattarella expressed his strong interest in providing help to all Libyan parties to overcome their differences, and reach a consensus.

He stressed that “the only way out of the current Libyan crisis must be based on a common constitutional basis, as soon as possible.”

Notably, Libya is experiencing a decisive political moment, following the failure to hold elections last December and the lack of reach consensus between the current Libyan political parties so far.

Oil-rich Libya has been wracked by conflict since a NATO-backed uprising toppled and killed longtime leader Muammar Gaddafi in 2011.

Fathi Bashagha, a former interior minister and air force pilot, was named Prime Minister by the country’s eastern-based Parliament in February. Incumbent PM, Abdel-Hamid Dbaiba has refused to step down, insisting that he would only hand over power to an elected government.

Dbaiba’s appointment last year, as part of a UN-led peace process, was clouded by allegations of corruption and bribery. Dbaiba was due to lead the country through elections in December, but the vote never took place.