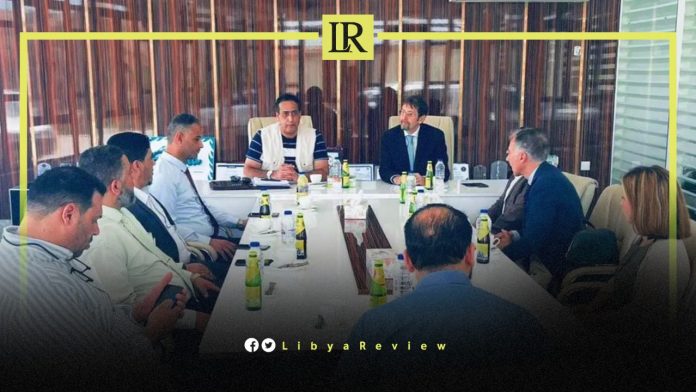 The Mayor of the Libya city of Derna, Abdel Moneim Al-Ghaithi, met with the Italian Consul in Benghazi, Carlo Batori. They discussed the consolidation of the relationship between the two sides. They further spoke about ways to lay the foundations for long-term political and economic cooperation that would support institutional and service reform programs in various fields.

The meeting discussed the file of reconstruction and revitalisation of economic programs for both the public and private sectors. They mentioned stimulating internal and external investments to reach sustainable development, which will positively and directly affect the lives of the citizens.

It is worth noting that the Italian Consul’s visit to Derna came at the invitation of the city’s Chamber of Industry, Commerce and Agriculture. His visit included an inspection tour of a number of sites, including the old city.

This came during a meeting between Libya Deputy Prime Minister, Ali Al-Qatrani, and the Minister of Water Resources, Mohamed Doma, together with a delegation from the Libyan-Italian Chamber of Commerce. The meeting was held at the Cabinet Office in Benghazi.

Both sides discussed joint investment projects, and reviewed developments in the road project linking Imsaed and Ras Ajdir. They also referred to the project to establish a free trade zone in the Bamba Bay, linking this with the free trade zone in Kufra via railways.

During the meeting, plans and studies for the Bamba Bay Free Zone project were presented. This is a major investment project in Libya, due to the importance of the region’s geographical location.

Al-Qatrani also stressed the importance of completing the stalled housing projects in Libya as soon as possible.

On the 10th of February, the Speaker of the Libya Parliament, Ageela Saleh, announced the unanimous appointment of Bashagha as the new Prime Minister. However, Abdelhamid Al-Dbaiba warned that the appointment of a new interim government could lead to war and chaos in the country. He renewed his pledge to only hand power over to an elected government.